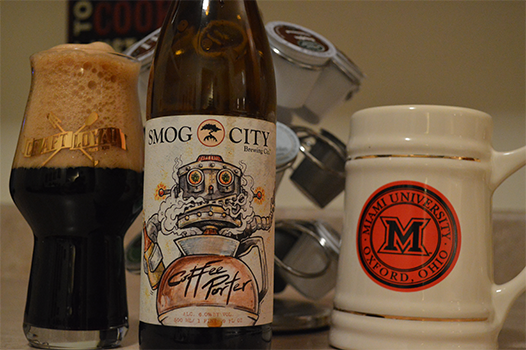 After a week (or so) off due to Thanksgiving break, I am ready to dive back into some world-class craft beer.  The beer today is Smog City’s Coffee Porter.  When our friend, Sergio, saw us drinking Coffee Bender, he contacted us and said we had to try Smog City’s offering because it was “the closest a beer can get to tasting like a good cold brew.”  If that’s the case, count me in!

Smog City is out of Torrance California, and their 6.0% ABV Coffee Porter is so good that it won a Gold Medal at the Great American Beer Festival in 2012! This is the description from Smog City themselves:

A coffee-beer, rather than a beer with coffee. A robust porter aged on fresh locally roasted, fair trade ground coffee. Enhanced flavors of chocolate, roasted malt, and of course coffee are present. “Like a chocolate covered espresso bean.”

As someone who didn’t quite grasp how good coffee was until a much later age, I relied on chocolate covered espresso beans to give me a quick wake up (and a quick 10 pounds) in high school.  Here’s to hoping that description is anything near accurate!

The first impression of Coffee Porter is that it’s way over-carbonated.  I barely poured three ounces into my (utterly beautiful) Craft Loyal Master Glass, when it decided to try to fill the glass with foam.  It actually too longer to pour this beer than it did to complete this entire review! That being said, it is jet black, more like a stout than a porter, and has a billowy light-brown head.  It looks like you put the foam from a latte on top of a cup of cold-brewed Americana.  Simply stunning!

What a great first impression! The aroma could be smelled when I was pouring Coffee Porter, and it is chock full of dark chocolate, burnt grain, and, obviously, loads of ground coffee.  It smells so dark, I can almost smell the bitterness.  If you like your coffee black, you will love the smell of this beer.  There’s also a slight cola-like aroma to this as well.  This beer smells absolutely fantastic! 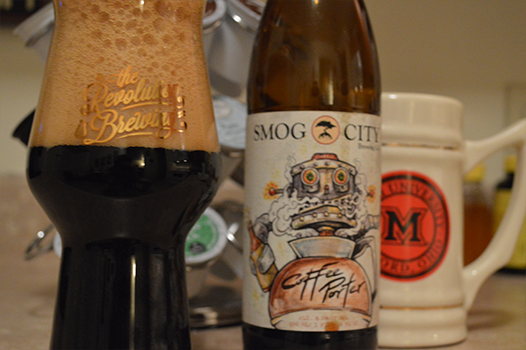 I always wonder if beers are going to toe the line between Porter and Stout, but Smog City’s Coffee Porter has the mouthfeel of a classic porter.  It is medium bodied, and even though it looked to be over-carbonated, the fizz is just right.  I’m sure some of it was released making it taste flatter out of a glass than it would from the bottle, but the way I’m drinking it, it’s great.  At 6% ABV, there isn’t any heat noticeable, but what I do notice is that cloying sweetness that coats your mouth in a malt-heavy beer.  Coffee Porter finishes smooth, airy, and inviting!

To be honest, I expected the up-front flavor of Smog City’s offering to be a bit more coffee-forward, but this beer’s flavor just snowballs — the longer you let it linger, the stronger the coffee, chocolate, and smoky flavors hit you.  The bitterness is all on the front.  It tastes like burnt grain, or the char from a fire-roasted marshmallow.  It’s just deep, burnt flavors, that is followed by a little hint of milk chocolate, and then back to coffee. Somehow, that chocolate-covered espresso beans description is spot on.  It has the lightness of a porter, which is appreciated because I feel like if this were thicker, I’d be done with this beer after one glass.  Coffee may be the star of the show, but this is still a fairly sweet beer.

I can’t really compare this to Surly’s Coffee Bender because that was a Brown Ale, and this is a Porter.  That being said, both were promising a big coffee kick, and in that regards I have to tip the scales in Smog City’s favor.  This Coffee Porter has all of the coffee you want in a flavored beer, while also adding complimentary flavors of chocolate and smoky grains.  It’s absolutely delicious and is going to get a 97 from me.  If anything, the sweetness on the back end was keeping it from being higher, but this is a beer that you absolutely have to get your hands on.  Drink it for breakfast, drink it after dinner, drink it at lunch — I don’t care, just drink this one.

Thanks to Sergio for hooking us up, and as always, Cheers!

Note: reports say that there has been at least one infected batch of Coffee Porter, if your bottle tastes off, please try this one again!