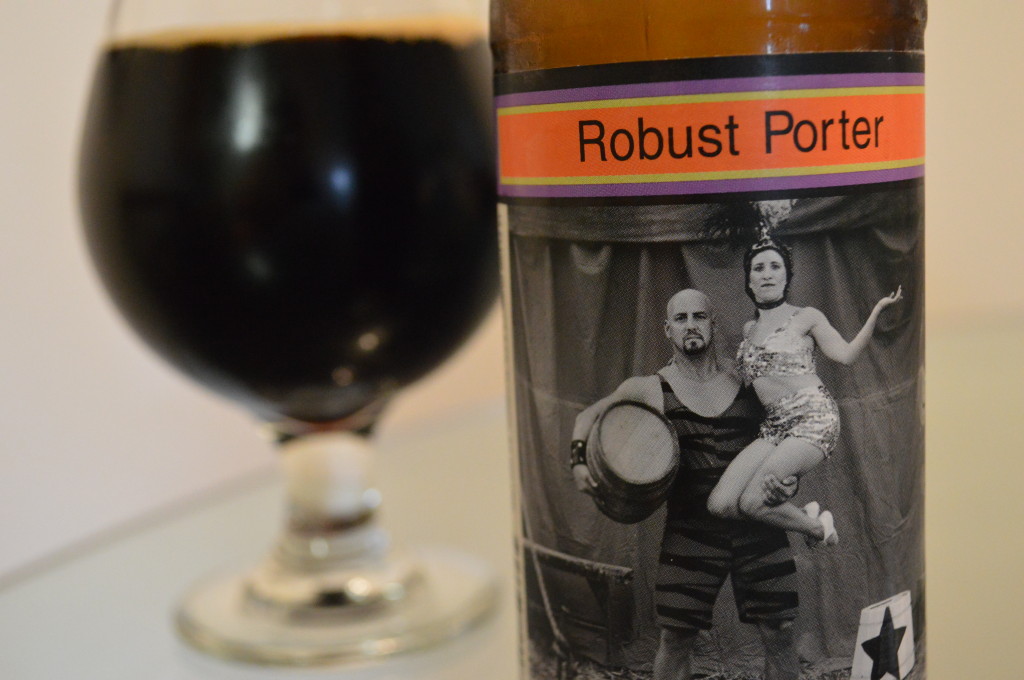 Nothing says Robust like a man carrying a barrel and a woman at the same time without even looking like he’s trying.  In fact, the woman on the label, who is literally just being held there so she can pose, looks like she’s having a harder time holding the pose that he does!  What does that have to do with beer? Well, it sets up my expectations.  I hear the words Robust Porter and I expect something with a deep, dark, roasty, coffee-like flavor to it.  I expect this beer to be borderline stout!  But, before I take my first sip, I wanted to see what Smuttynose has to say about thier Robust Porter.

Award winning, eh? Coffee and chocolate, eh?  Then you end it with the claim that dark beer fans won’t find a better porter?! That’s a bold statement for any brewery to say.  But, they succeeded in gathering my attention, so let’s dive in!

Like the video says, Robust Porter is black as night.  Well, actually, when I was pouring it, there was this beautiful red hue to the stream of beer pouring from the bottle.  It reminds me of how the ocean is blue, but a single cup of ocean water is clear, this beer in small quantities appears more red in color than it does black.  The head is thin and dark khaki, while the carbonation seems to want to rise to the top, but cant.  There are streams of bubbles around my glass, like waterfalls in reverse, clustering into pockets of foam on the surface.

A great chocolate aroma explodes out of the Robust Porter.  The accents of coffee remind me more of a dark chocolate Mocha, than a chocolate milk.   There’s also a strange, burnt sweetness that reminds me of burnt barbecue sauce:  It’ll be bitter from char, but also sweet by nature.  Maybe that’s the hops coming through, that give it a deep bitter aroma, but it reminds me more of smoked meats than pine or grass.   I also detect slight amounts of vanilla that meld perfectly with the coffee, chocolate, and burnt characteristics of Robust Porter.

This really is a beer that is between medium and full bodied.  It’s “extra schmedium” if you will.  The carbonation cuts through the sweetness of the malt, and foams up a bit like mouthwash when swished in the mouth.  Without the carbonation, this would probably feel on the thinner side of things.  It finishes cleaner than it starts, but leaves a nice, espresso-like aftertaste that is in no way off-putting. 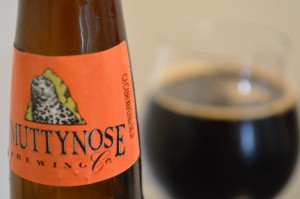 Robust is actually a great word to describe the flavor here.  While the mouthfeel isn’t overly robust, the notes of coffee, and burnt grains really shine.  Chocolate comes through, as well as some hoppiness that is unexpectedly delicious.  It has a bitter aftertaste, like slightly hoppy espresso, that is almost better tasting than the beer itself.  As it warms, I get some notes of hazelnut, vanilla, and the chocolate gets stronger and stronger.  A really complex beer that does not disappoint!

So is this award winning beer deserving of the title Robust Porter?  I’d say yes!  At times it’s hard to call this a porter and not a stout because of the boldness and body of the beer.  I’m going to give Robust Porter a 90, A-.  While it was delicious, I would have liked to see more body out of it, and not the “fake” body caused by the carbonation.  I agree, though, that this is one dark beer that is dangerously drinkable.  If you see this beer, give it a try, and enjoy it with barbecue, a roast, or some vanilla ice cream!