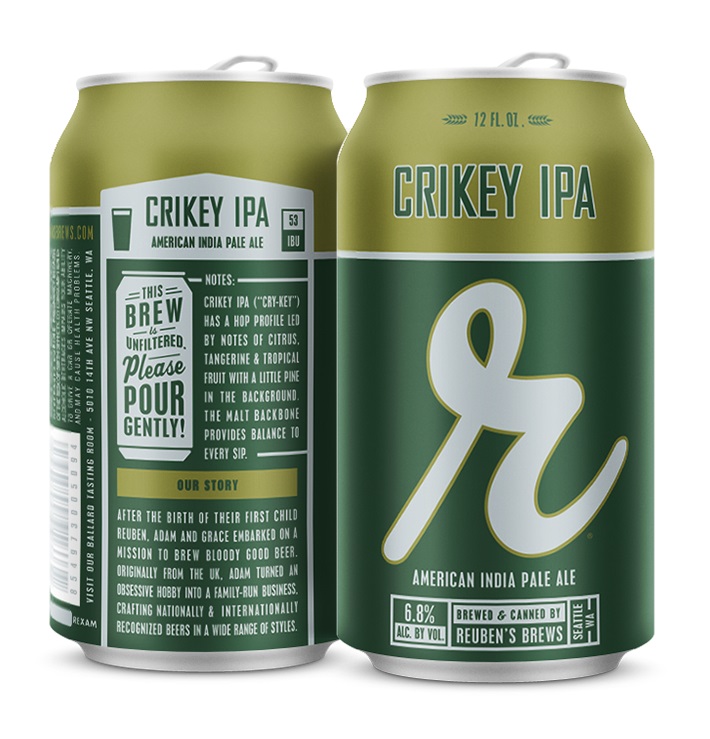 SEATTLE, Wash. (June 7, 2016) Just in time for summer, beer lovers will have another Reuben’s Brews creation to take along on their adventures – in cans.

Crikey IPA (pronounced Cry-key) will make its debut in 6-packs of 12oz cans in the Reuben’s Brews Taproom on June 10. It will hit the shelves of local stores beginning June 14.

“Crikey was the first traditional, American-style IPA we ever brewed and we’re very proud of it,” says Adam Robbings, co-founder and head brewer of Reuben’s Brews. “When I designed the recipe, I wanted Crikey to be different and intriguing so we focused on a fruity hop profile with underlying citrus, and a malt backbone to provide balance. Crikey has since gone on to win a number of awards and has become a firm favorite among our customers. We’re excited to add Crikey to our year-round can offering.”

For those residing on this side of the pond, the name, Crikey, begs some explanation. British born Adam landed on this name, as it is the perfect expression of astonishment, surprise or amazement over the sheer deliciousness of this award-winning American IPA.

At 6.8% ABV and 53 IBUs, Crikey uses judicious amounts of the brewery’s favorite hops – Citra, Amarillo and Simcoe. Its hop profile is led by notes of citrus, tangerine and tropical fruit with a little pine in the background. Crikey has won a number of awards including Best IPA in the Pacific NW in the 2015 US Beer Tasting Championships, Silver at the 2015 Best of Craft Beer Awards, and earned a 94 rating in DRAFT magazine.Crikey completes the brewery’s can line up which was launched earlier this year – joining the year-round Gose and seasonal can, which is currently Summer IPA. Crikey is also available year round in 22oz bottles and on draft.

About Reuben’s BrewsAfter the birth of their first child Reuben, Adam and Grace embarked on a mission to brew bloody good beer. Originally from the UK, Adam turned a passionate hobby into a family-run brewery crafting nationally and internationally recognized beers in a wide variety of styles. Since opening in 2012, Reuben’s has won awards for its beers around the world including at the Great American Beer Festival, the World Beer Cup, the US Open and was named Mid-Sized Brewery of the Year at the 2015 Washington Beer Awards. Find Reuben’s Brews in Western Washington and at its taproom located at 5010 14thAve NW in Ballard, open 7 days a week. For more information, visit www.reubensbrews.com or follow on Facebook, Twitter and Instagram (@reubensbrews).