Well, craft beer lovers, they’ve finally gone and done it. Yes, Anheuser Busch (AB-InBev) has gone and made the Absolute WORST beer I have ever had. Hand’s down. Bar none. This is as bad as beer can possibly get. I am positive of that. I foolishly thought that Coors was responsible for the worst beer I’ve ever had. That lowly ranking has been championed without contest by Budweiser’s newest travesty; Oculto; a tequila-flavored beer. If, and that is a HUGE “if”…IF you are enticed by the idea of a tequila-flavored beer, allow me to drop a nuclear sized truth-bomb on you. Oculto is not good. It is the worst beer I have ever had. Below is our video-review of this abomination, but I implore you to read on below the featured video to watch as a paint a tapestry of hatred all over this website over this primordial-soup of a “beer”.

Oculto, which has not been released to the masses yet (I know this because of the lack of the mass extinction event that is sure to come once this hits the shelves). It is scheduled to release Spring of 2015 which means that much like the creepy registered sex-offender you looked up on that internet database, this swill is right around the corner.

Oculto is “brewed” with blue agave and then blended with what–is-supposedly beer aged [rotting] in tequila barrels. The launch is designed to attract younger drinkers that aren’t drinking hard liquor yet by giving them a ‘taste-of-the-good-stuff’ by incorporating a tequila “flavor”. The brand also wishes to capitalize on popular Mexican beer sales al la Dos Equis, Corona, and Modelo.  Despite the tequila staves this beer is aged on, it should be known that Oculto has no tequila in it. I find it ironic and cringe-worthy that AB-InBev just released a Super Bowl commercial making fun of craft beer drinkers, yet has been snatching up craft breweries left and right, and is now attempting to release a new crafty brand in Oculto. For shame, AB. Be better than that.

The one good thing that Oculto DOES do is market well. Oculto has a fairly badass label that features a skull with the Oculto name etched into it. One neat feature of the bottle is that the haunting eyes staring into your soul will glow an evil green when the bottle is cold. Don’t be fooled like we were. Oculto’s bottle is trying to warn you of the impending doom quickly approaching you. Much like the poor girl in the Exorcist, the bottle has a demon inside of it – ready and waiting to destroy you. 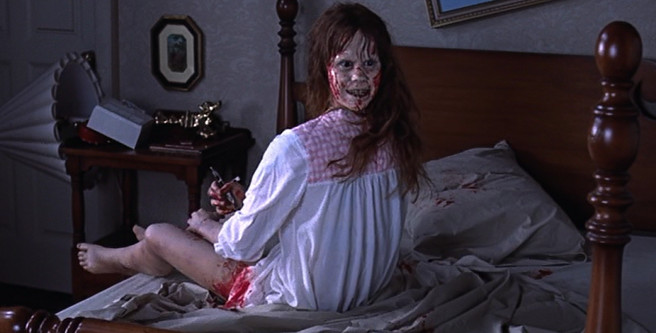 I almost prefer this experience to that of drinking Oculto

The appearance of Oculto is much like any other typical Mexican-style lager. It is vibrantly yellow, and while most Mexican lagers have the appearance of human urine, Oculto is one of the only brands that actually manages to capture that essence within it’s flavor! Much respect to Oculto for bridging that long- explored-but-never-achieved gap.

The aroma on Oculto is puzzling and downright mysterious. Between the overly sweet “tequila” aromas flooding your olfactory, your brain will be racked with the task of dissecting the competing aromas of stale tortilla chips with soggy cardboard and sadness. If that doesn’t entice you to fill your parched mouth with the liquid fecal matter of the Mexican beer gods, then I’m just not sure what will!

If you have read all of the above and STILL want to know what Oculto tastes like, you are one of two things; a sadist who enjoys self-infliction of pain and suffering, or you’ve been blessed with the condition where you feel no pain. Oculto would be better suited for the second round of Fear Factor where it is incorporated into the blend of roaches and grasshoppers than it is suited to be inside of a beer glass, not to mention a human body. The first sip I took of Oculto resulted in an immediate, though subdued gag (I was on camera, after all). If you have the gag-reflex of an adult film star, you should have no problem at this point of the experience! Oculto’s flavor is a mix between rotten feet and vomit. There is simply NOTHING pleasant about this flavor profile. It is a mixture of some strange lemon-pledge type cleaning solution and sticky, flat, old, expired 7-Up or Sprite. Those same lovely fake citrus flavors found in Coors Lite Summer Brew have found their way into an AB-InBev bottle – except this time – add fake tequila flavoring! I would not be the least bit surprised if Oculto was the toxic run-off of some horrific boating accident that occurred when Coors attempted to hide the rest of Summer Brew at the bottom of the ocean. The flavor on Oculto is sick, disgusting, and quite honestly laughable that a beer could ever reach these types of lows.

Moral of the story; avoid Oculto at all costs. While it does have a really neat bottle and label, that is where anything salvageable about Oculto sadly ends. I am SO “happy”[?] that we were able to get our hands on Oculto before it hit the shelves so that I could do my best Nostradamus impression and foretell of great horrors that are to come to all of you craft beer lovers out there. If you enjoyed reading this review [warning] please share it with your friends!