Happy December 20th! Only 5 more days until the Big Guy drops some delicious craft beer down your chimney! Thanks for tuning in to another edition of our 25 Days of Beers & Cheers! Today we have a Belgian Strong Ale from Brasserie D’Achouffe (Belgium) called N’ice Chouffe

According to Brasserie D’Achouffe, N’ice Chouffe is a dark brown, fruity, lightly hoppy, sparkling strong beer that is NOT pasteurized.

This will be our first imported beer on 25 Days of Beers & Cheers, and many have told us that the best Christmas beer hails from Belgium. We thought we would give the Belgians a chance to compete in our Holiday beer run-down today!

N’ice Chouffe pours a very dark reddish brown color. The most appropriate descriptor would most likely be ruby. It has beautiful reddish hues throughout the glass and is truly a beautiful beer. There is a very light, thin off-white head that surrounds the rim of the glass, and throughout the beer is a lively stream of carbonation. Their description of “sparkling” is right on the money here. N’ice Chouffe is a very pretty beer to look at. 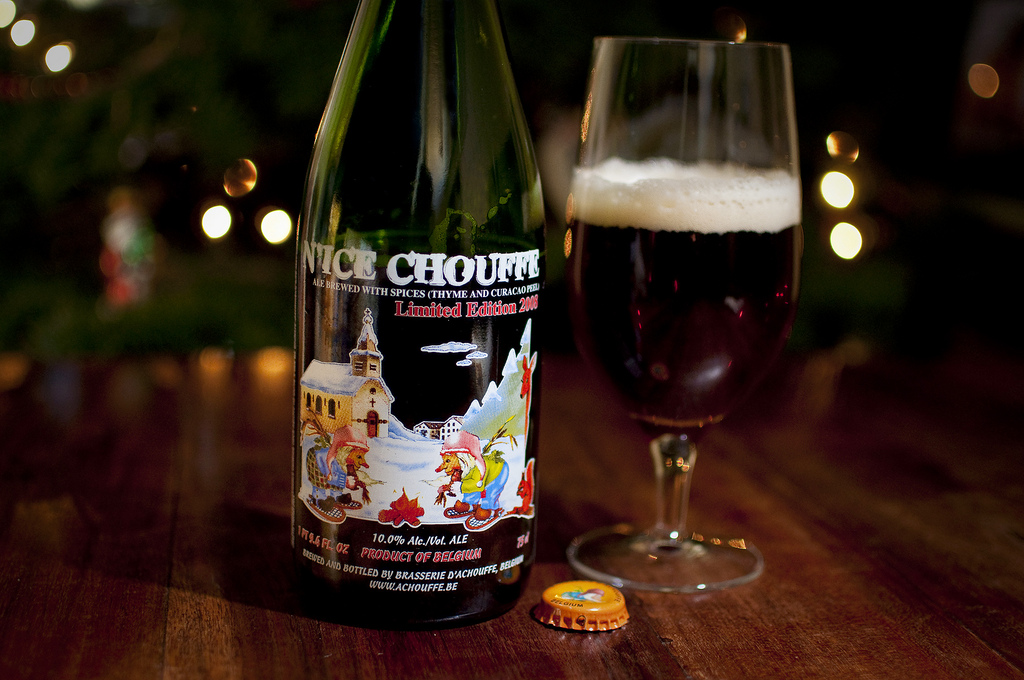 STRONG ALE!! This beer’s aroma packs a PUNCH. Strong aromas of dark fruits such as plums, raisins, dates, and figs dominate the nose on N’ice Chouffe. Just as your nose absorbs the haymaker of dark fruit aromas, you are blindsided with a straight mollywopping of booze and alcohol fusel notes. There are some holiday spice notes as well, though heavily masked by the alcohol presence. There are notes of ginger or cinnamon and thyme. Also mixed within this complex aroma is vanilla or a very thick syrup, teetering on molasses . This beer has waves of aroma. One could spend quite a bit of time just focusing on the aroma. Truly distinctive compared to the other brews in our 25 Days of Beers and Cheers series. 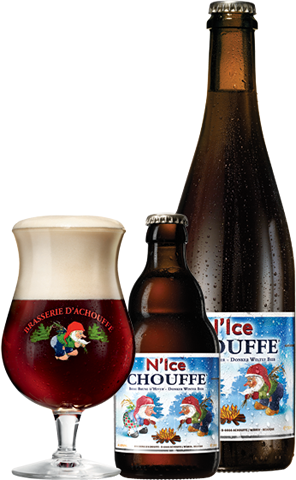 The taste on N’ice Chouffe is somewhat less complex than the aroma. I am happy to say that the alcohol presence detected on the nose is not as prominent in the flavor of N’ice Chouffe. What I do get is a cacophony of flavors. Holiday spices infused with almost an anis or black licorice come through. The alcohol does make itself known in your stomach. This beer is the true definition of a winter warmer – woof- this thing WILL warm you up. Mixed within all of this, N’ice Chouffe has a sweet malty background with some thyme, caramel and orangish notes. Not a whole lot of hop presence within N’ice Chouffe, but that is to be expected with a Belgian Strong Ale. Interestingly, on the very backend of the flavor is a spicy, smokey wood flavor. Interesting! Overall, this is one complex brew.

Overall, I give N’ice Chouffe a 92, or a B+. N’ice Chouffe packs a serious punch of both aromas and flavors. When I am shivering on a cold winter’s night, I am absolutely going to grab a bottle of N’ice Chouffe, as it will warm you up with that significant alcohol presence. The reason this is not an A beer, in my opinion, is that a beer’s flavor should be the highlight of the show, and not masked by high amounts of alcohol. To me, that is a detractor in the overall experience. N’ice Chouffe is quite tasty, and gives an interested beer drinker a lot to think about and ponder as you enjoy it. This brew is definitely a Christmas ale, and is a welcomed addition to our 25 Days of Beers & Cheers!