If you’re a beer lover, like me, you know there’s only one Christmas present that keeps on giving — a beer of the month subscription!  Luckily, I have an amazing family, and my brother and sister-in-law signed me up for the Original Craft Beer Club.  I received a package earlier this month with a 12-pack of brew (3 bottles of 4 different varieties) complete with descriptions of the beer, descriptions of the featured breweries, recipes to pair with said beer, and one of the best bottle openers I’ve ever used.  The opener doesn’t look fancy, but the torque is beyond belief; caps fall of in fear!

One of the featured breweries this month was Mustang Brewing from Oklahoma City, Oklahoma.  Their focus is on, “Distinctive, sessionable beer,” which explains the Winter Lager.  Most breweries deal solely with ales because they are less time consuming, can be fermented at higher temps (leading to energy efficiency), and are easier to create big, bold flavors.  Lagers tend to be cleaner, less phenolic, smoother, and, as Mustang aims for, easier drinking.

This is actually a new and improved version of Winter Lager.  The beer used to be a little lighter, but Mustang decided to make it darker and bolder for the 2013 release.  Winter Lager is made with earthier varieties of hops, only the finest barley, and Black Strap Molasses which is supposed to lead to a smokier flavor.  It sounds like the perfect beer for the “balmy” 25 degree weather we’re enjoying today.  Enough talking, let’s dive in!

Foolish me.  When I think of a Lager, I automatically think light, maybe an amber color like Yuengling, but Mustang’s Winter Lager pours a deep brown color that borders on black.  There are some beautiful red tones that shine through the edges of the glass when the light hits it just right, and this beer is surprisingly clear.  When held to the light, I can see silhouettes of my fingers holding the glass, between flashes of dark-cherry red.  I am guessing that if it were a lighter color it’d be transparent.  The head is thin and deep tan, but is almost completely gone only minutes after pouring. 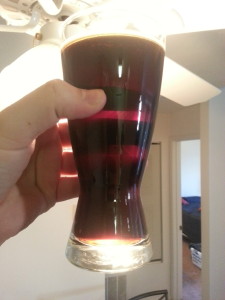 Wow.  This lager packs a huge malty bite!  Sweet brown sugar and molasses are the first wave of aroma, followed by earthy hop tones.  At 6% ABV, there is no booze aroma to speak of, just clean, sweet, malty goodness.  I also get some of those smoky, burnt-grain aromas you’d expect from a porter, like notes of coffee and chocolate.  If the flavor is anything like the aroma here, I’m in for a journey through layers of complexity!

When I first took a sip, I thought this was going to be a thick lager.  The carbonation gives it a false sense of fullness, but as I swish it around a bit I notice it has a very light body.  Not water like, but just a step above.  Carbonation levels are higher than I expected from a beer this dark, but help fill out what would be a thinner beer.  Winter Warmer is clean, not leaving any sweetness, bitterness, or off flavors coating my mouth, or in the aftertaste.

Just as the aroma foreshadowed (good English-teacher word!), this brew is several layers deep.  It is almost a mixture between an American-style lager, and a porter.  It is malt-forward, but finishes completely clean and smooth.  I can taste the molasses the most, but dark malts and coffee linger long after the swallow.  There isn’t much of a hop presence, but there are some great earth tones that sneak behind the sweetness of the molasses, which I accredit to the Fuggle and Hallertauer hops.

Mustang set out to create drinkable beers, and on that note, they passed with flying colors.  This is easily the most drinkable beer I’ve ever had that has this much flavor to it.  I’ve had many German dunkels, and other dark lagers, but none have quite the flavor profile that Mustang achieved here.  Like I said, it was almost like a weak porter.  The perfect segue beer for someone trying to start liking darker beers, but who might be afraid of going full-stout.

Judging on the style, I have to give this beer an A.  Somewhere in the 93 range sounds right to me.  It is really refreshing, and has just a great kick of flavor at the start.  I compare this beer to those times you need to get around someone while you’re waiting at a red light.  You hit the gas hard, then when you’re in front you ease back to cruising speeds.  This beer shoots out of the gate with flavor, and quickly mellows out to a clean, lager-like finish.

This beer would go perfectly with some braised short ribs, and glazed vegetables.  The deepness of the flavor would most likely overpower lighter dishes, but would fit well with something cooked low and slow.  If you see Winter Lager this year, please pick it up, kick back, and enjoy the tastes of a smooth, malty treat.