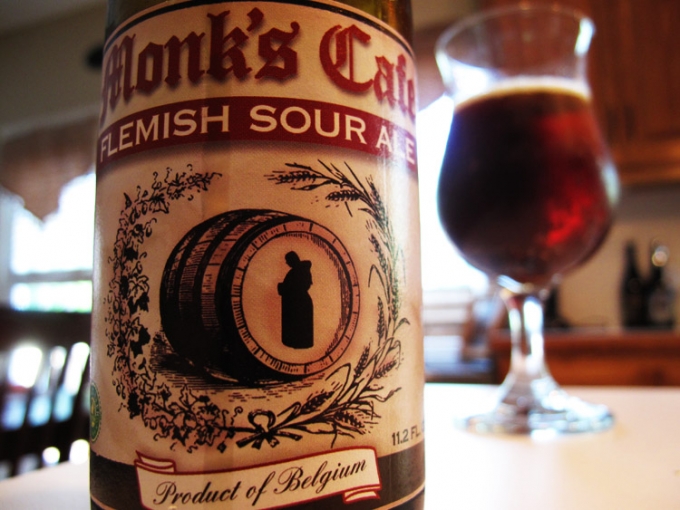 Even though my local bottle shop is exploding with Christmas themed beers (all of which I hope to try and review!) , I don’t want to become innundated too quickly with the spirit of Ole Saint Nick! It is, afterall, only the 4th of December and we have 20 more days before the Fat Man makes his rounds to bring us our adult goodies! So, in the spirit of practicing patience, I decided to try a style that I am quickly falling in love with: Sour ales.

I have previously reviewed other amazing sours, especially the Traverse City Sour Cherry Ale from Brewery Ferment up in Traverse City, which is doing some amazing thing with sour beers. When I found Monk’s Cafe in my local shop, I knew I had to try it.

The offering of sour style beers is pretty depressing around the Toledo, Ohio area, so whenever I get the chance to try or buy one, I jump on that opportunity. Even though Monk’s Cafe carries a higher price tag than I usually buy, I went ahead and splurged!

Here is what Monk’s Cafe  has to say about their Flemish Ale: “That’s right, our own private label brewed for us by the family-owned Van Steenberge brewery, just outside Ghent, Belgium. Medium body, red color, somewhat fruity nose, malt flavor with a slight lactic taste. Great Stuff! A real thirst quencher and palate cleanser.”

With incredible anticipation, I cracked this beauty open. Here is what I thought about the beer:

Aroma: Whew! Right away there is an extremely sour aroma. This is a wild smell for sure. It smells almost yeasty. My tongue salivated just from smelling it, almost the effect you get from smelling those sour stringed candies or a warhead sour candy.

Taste: To my utter surprise and disappointment, there taste is very mildly sour. The actual flavor is much less intense than the aroma. There are tastes of Granny Smith apples or green sour apple flavor. Sadly enough, there is not much flavor to be honest. Pretty mild in terms of acidity or that classic sour taste.

Conclusion: I give Monk’s Cafe Flemish Ale a 80 or B-. Though the aroma and appearance are wonderful, I simply wish it was more sour or had more flavor of anything at all. This Flemish ale is not a bad beer by any means and would be a really nice introduction beer for someone new to the sour flavor or Flemish style. I probably over-hyped this beer in my own mind, as I am wild on sours right now, but sadly, I don’t think it’s worth the 6 dollar/12 oz price.