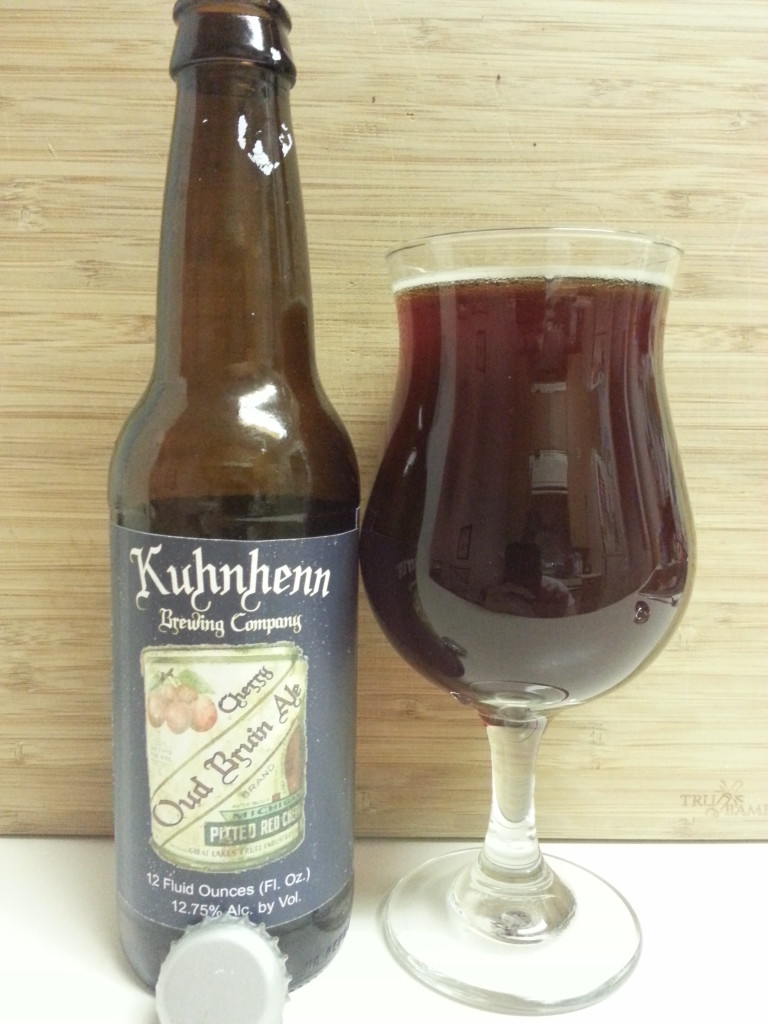 If you’ve followed our site for a while, you may remember the name Kuhnhenn from our Brewery Review, and our review of their award winning Double Rice IPA.  If you’re new to the name, don’t worry, you’re not alone.  Kuhnhenn’s is the epitome of a “diamond in the rough”.  Located in Warren, Michigan, this tiny brewery is known by locals, but not necessarily known by the public at large.  A couple months ago we stumbled upon them, and I’m glad we did because they are making some really amazing brews.

On our first trip to Warren, the employees at Kuhnhenn’s made sure we were aware of their Winter Solstice bottle release party.  On December 21st, they wake up early to throw a party to release some of their harder to find beers.  The party came complete with music, food, and a beer tent to relax in while you waited for your order to be filled.  The way it worked was that you’d receive an order form, fill it out with the beers you want, and then wait for them to box up the beers and call your number.  Since it was on a first-come-first-serve basis, people line up at ungodly hours in the morning to make sure they can get the beer they want.  We left Toledo at 5, and arrived around 6 a.m. only to find out we were 150th in line!

This type of hype is great for a brewery.  Parties like these are the craft beer equivalent to the newest iPhone release:  people stood in line for hours, in the freezing cold, for a product that they had never tried before, but they trusted was good based solely on the brand.  The only downside to the Winter Solstice was the wait after we put in our order.  I believe we put our order in around 9 a.m., and didn’t receive our beer until 3 p.m.  This wait made me want to wait to try the beer, to really savor the experience of a beer so rare, and the first drink I’m opening from my order is Oud Bruin Ale.

Oud Buin Ale is an old brown ale with Michigan cherry juice and a mixture of house yeast, and the ever dangerous “Brett”.  Brettanomyces is the yeast responsible for the tartness in sour ales, and I call it dangerous because it is a very dominant strain of yeast.  You usually are told to ferment sours far away from your other fermenters to avoid cross contamination.  But I like sours, and I love cherries, so let’s finally dive in!

Oud Bruin is simply stunning.  It is both dark brown and red at the same time; brown in the middle, and red around the edges.  When held up to light, this beer glows a brilliant cherry red.  It seems like Oud Bruin wants to be a clear beer, but I would call it translucent at best.  I can see some light shining through, but I can barely see my fingers on the other side of the glass.  It didn’t pour with much of a head, but what lacing remains is a dark cream color froth that is only hanging on to the outside of the glass.

The first thing I notice is a funky, brett-like sour smell.  I can make out hints of cherry sweetness, but for the most part it get the good lactic smell that a sour beer has.  On the other hand, I notice some slightly off aromas: some astringency and oxidation come through.  Lastly I need to mention the huge smell of booze coming from my glass.  This is a 12.75% ABV beer (!), and it definitely smells like it is going to have a nice, boozy punch.

Oud Bruin doesn’t look carbonated, but it has a good, crisp, CO2 fizz that bites the back of my throat.  It has a medium body, and a boozy aftertaste that burns going down.  It is almost like drinking a carbonated wine more than a beer.  Small sips are best here, even a good mouthfull is a bit too much burn for me.

Right off the bat, I get a mouth-puckering sourness.  I don’t know if they used sweet or tart cherry juice, but this beer starts very tart, has some sweetness in the middle, then finishes with a bitter flavor that hangs onto your uvula and won’t let go.  As I could tell with the aroma, this beer tastes a bit spoiled.  I don’t know if it got contaminated, or if it oxidized, but it’s astringent and has a cardboard-like taste halfway through the drink.  It is cool how this brew hits you in layers, but, unfortunately, I don’t love the flavor layers Kuhnhenns built (intentionally or not) here.  The high ABV is overwhelming, and the aftertaste is simply off-putting.

Well, I don’t like to give bad reviews, but I have to be honest.  This just isn’t a beer I would order again, and it’s a beer I won’t even finish.  I’ll be the first to admit that I’m not a sour beer aficionado, but I’ve tried and enjoyed a lot of sours in my life (Tart of Darkness being my favorite!) and this one doesn’t sit well with me.  Kuhnhenn’s considers it an “old” brown ale, and I think it tastes just that — old.  It tastes like a batch of my homebrew that went wrong or got contaminated.  It has a staleness that I just don’t appreciate.

For the reasons stated above, I’m going to give this beer a 65, D-.  Seems harsh, and maybe it is, but it just wasn’t a flavor that I enjoy.  I appreciate the fact that they can make a beer at almost 13%, I like the use of Michigan ingredients and the use of Brett to give it some tartness, but in the end it’s a beer that I dumped.

I want to note that I’m still a big supporter of Kuhnhenn’s, and am excited to try the other brews I ordered at the Solstice, but Oud Bruin was a miss for me.  I’d love to hear feedback from someone else who tried this beer to let me know if I just don’t like the style of beer they made, if this was a bad batch, or if it’s just not a great beer.  Craft beer, like so many things, is about opinions, so if you disagree don’t hesitate to comment.