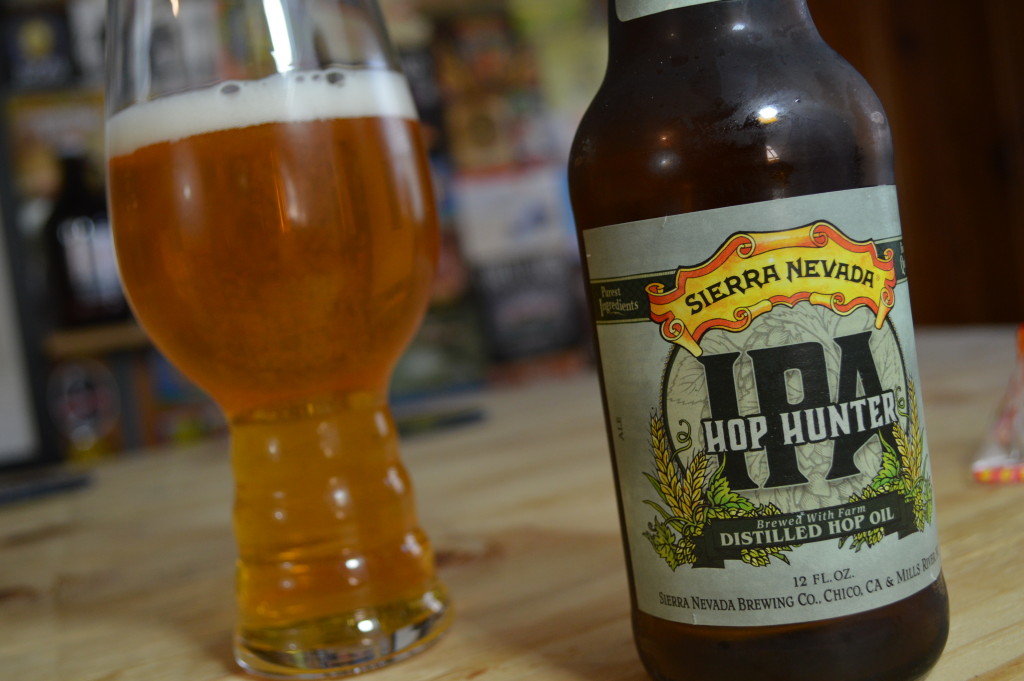 IPA’s come in all different shapes and sizes.  Some are dark and malty with a balancing act of hops, some are borderline Double IPA’s, and I’m sure you can find everything in-between.  What Sierra Nevada is promising with Hop Hunter is “The Ultimate IPA Experience”.  That’s a bold claim, even for someone as reputable with their hops as Sierra Nevada.  They Say that Hop Hunter:

… is the first beer to feature oil from we hops steam distilled directly in the field, minutes after harvest… [used] in concert with whole-cone hops in our brew kettle and in our Hop Torpedo to create the ultimate IPA experience.

What is Hop oil? Let Sierra Nevada tell you themselves.

Some may see this as a marketing scam, but I see this is innovation and experimentation at its finest.  Without trying things like this, the beer world can get stagnant, but we’ll save that debate for another day.

Based on looks alone, this beer really could live up to the claim of the “Ultimate IPA Experience”.  It is a light amber color with smatterings of orange and yellows throughout.  In fact, it seems to be on the lighter side of the IPA color line, opting for translucent gold as opposed to rustic copper tones.  The head on this beer is impeccable; starting at 2 fingers thick and holding strong well after the initial pour.  When it comes to the carbonation, this looks more like a wheat beer than it does an IPA.  I almost feel like Hop Hunter is going to start exploding out of the beer at any second.  If anyone has ever made a “works bomb” at home with tin foil and household cleaner in a plastic bottle, then you’d know the suspenseful feeling you get as you watch that bottle expand ever so slightly until combustion.  If this beer spontaneously combusted, I wouldn’t be surprised.

Does collecting hops oil fresh from the fields minutes after harvest really matter when it comes to the Aroma of the beer? Yes, God yes, 100 times yes! I won’t say that this smells as strong or as interesting as say Heady Topper, but the distinct freshness of the hops cannot be overlooked.  For those of you who are home brewers and have experimented with growing your own hops, you know just how fresh hops smell.  There’s a slight grassiness, a lighter, more citric aroma to fresh hops, and an overall more subtle and delicate experience.  That’s what I get here.  It smells like freshly mowed grass, mixed in with vine-ripened lemons.  This is followed by some big tropical notes.  Orange peel, pineapple, and grapefruit are more prevalent than pine and resin. Overall, this is one of those beers that you could turn into a candle and become a rich, rich man.

While the appearance made it seem like this was going to be a wheat-beer-like experience full of loads of carbonation and body, Hop Hunter takes a more subtle approach.  The beer is a lot thinner than I expected, on the light-side of medium bodied, and the carbonation seems to be more for show than mouthfeel.  It’s not flat by any means, but it also doesn’t give the Pop Rocks feeling that over-carbonated beers tend to leave behind.  Overall, this is a dangerously drinkable beer, when it comes to mouthfeel.

With all of the hops on the aroma, I kind of expected this to be a bold, bitter IPA.  Instead, I’m pleasantly surprised by a smooth, fruity, citrus-forward hop flavor with minimal bitterness.  It’s as if those fresh-hop oils allowed the hops to give off flavor, but not leave your tongue feeling assaulted.  I’ll also admit that this has more of a earthy, herbal hop presence than it does tropical fruits.  Yes, I get some grapefruit and lemon, but the pineapple and juicy orange I got on the nose lead way to a dank, floral tone.  It’s not as pungent as the aroma may have lead me to believe, either, but that’s not necessarily a bad thing.  Notice how I haven’t mentioned malts yet?  That’s because this is a total hops showcase.  Who wants stinkin’ malts in their beer anyway?!

Was Hop Hunter the “Ultimate IPA Experience”?  Not quite, but it was pretty damn good at the same time.  This bottle wasn’t old at all, only a month and a half from the “bottled on” date, but I feel like had this been within a week of the “bottled on” date, this would be a very different story.  I have heard such big things about how aggressive it was, but, to me, it was a smooth, drinkable IPA.  I’d give Hop Hunter a solid 92, A-.  I enjoy the experimental part of Sierra Nevada’s offering, but I’m just not in IPA heaven with this bottle.  The hop oils were great, I think they really lead to a unique hop-forwardness with minimal bittering, but the body of this beer, and the lack of overall “punch” took me from going higher.

Crew, if you still see some of these brews on your local shelves, go pick them up.  They’ll be great with your Memorial Day cookouts, pairing well with burgers, steaks, and seafood alike.  Pair this with a plate of cilantro and shrimp tacos with avocado and call it a good weekend!