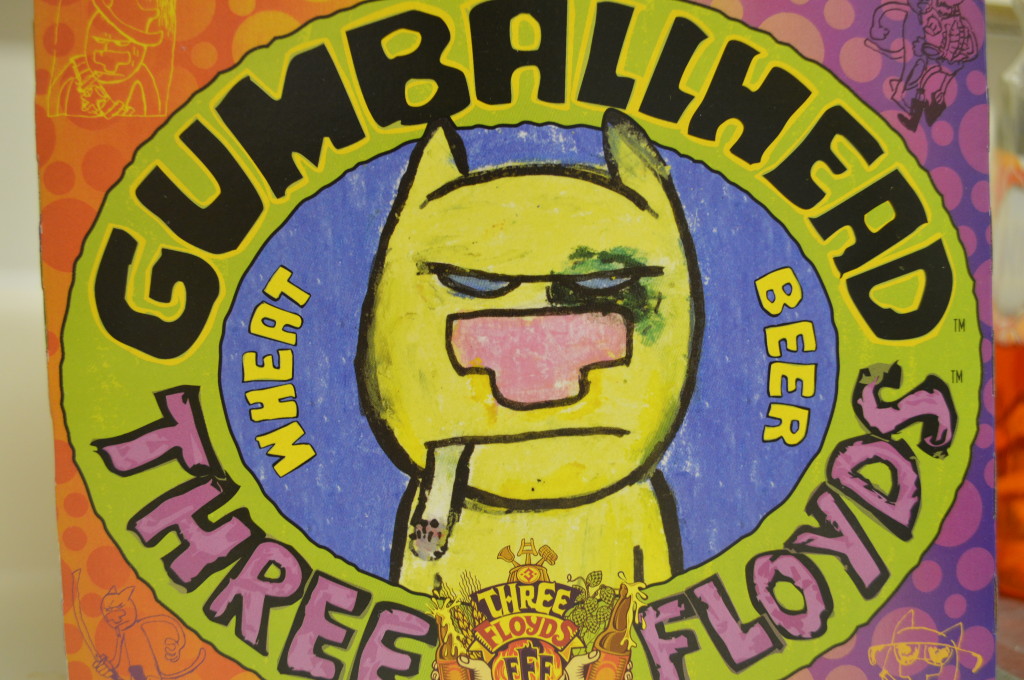 There was a time when I didn’t know Three Floyds.  I know, it’s hard to admit, but only a few years ago I was completely clueless to much of the craft-beer scene outside of Ohio and Michigan.  When I went to visit my sister and her husband in Chicago, he introduced me to the “Not Normal” brewery in Munster, Indiana.   The beer he chose to give me as my right of passage was Gumballhead.

By definition, Gumballhead is a wheat beer.  It says it right on the label, and technically the beer fits the bill, but, like all of their brews, this isn’t just your average summer wheat.  The way I see it, Gumballhead is a hoppy pale ale with wheat beer tendencies.  Brewed with heavy doses of Amarillo hops, this is a beer made to be hoppy, sessionable, and delicious.  So why the strange name? Gumballhead was named after the cat on the label, a Comic character by Rob Syers.

While we were in Chicago shooting videos with Chris Quinn, I noticed the familiar label and had to pick up a sixer.  It’s been a while, but I can’t wait to dive back in to my first taste of Three Floyds.

Straw yellow with a tight, white head that looks like lace — Gumballhead is an idyllic-looking summer wheat.  It looks like liquid America; amber waves of grain.  It’s hazy, but not opaque, I can still see my fingers holding on to the other side of the glass.  The carbonation is apparent, but isn’t bursting out of the beer like other highly-carbonated wheat beers.   Overall, just a great looking brew that reminds me of baseball, fireworks, and 80 degree days. 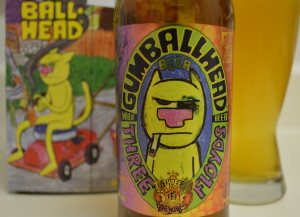 My favorite hops to brew with as a homebrewer are Amarillo.  This beer screams Amarillo.  It has notes of peach, grapefruit, lemon zest, and citric acid.  There’s a slight peppery smell, also, that is backed up by the breadiness of the wheat.  Wheat can add a biscuit-like aroma, but since they used red wheat in the grain bill, I almost get rye type spices and aromas.  But, the main thing that overpowers the nose of Gumballhead is a mixture of lemons and grass.

Gumballhead has a thin body.  It goes down like water with tiny, creamy bubbles lurking beneath the surface.  It doesn’t have the body a wheat beer should have, though this is a session ale, I remembered it being “thicker”.  It covers your palate with a sweet film that begs to be cleansed with the next sip.  The carbonation is more apparent than it looked like it was going to be, and does a great job of scrubbing away the sweetness.

You know, this really is a different beer.  It has the look of a summer wheat, but the hop presence of a pale ale.  The breadiness of 312, but the bitter bite of a session IPA.  The flavors balance out perfectly into a clean, drinkable, refreshing ale.  This is one of those beers that hits in quick waves.  Before the swallow, you get a burst of lemongrass and citrus fruits, during the swallow the wheat character shines through, leading to a grain-husk-like quality, and the finish is somewhat tart and dry.  The aftertaste lingers in a yeasty, biscuity way with a slightly sour twist, tempting you to come back for more and more.

There’s a reason that my brother-in-law wanted to introduce me to Gumballhead: it’s freaking delicious.  It has all of the hop qualities I love in a pale ale, but it is light and refreshing like a summer wheat.  It’s aromatic, bitter, and sweet all at once, but at the same time you could find yourself knocking back a few too many of these while watching your sitting in the bleachers of Wrigley Field.

I’m going to give Gumballhead a 93 A.  I love it, it’s a great example of what brewers can do when they don’t feel confined to stylistic guidelines.  I still don’t feel comfortable calling this a wheat beer, it’s just too hoppy for that, but in the best way possible.  The only thing I could ask is that this beer had less of an aftertaste.  To me, it lingered just a touch too long, which would be nice if it were just the Amarillo hops that were sticking around.

If you have the chance, pick up some Gumballhead this summer.  Get it on draft, or grab a sixer and go for a picnic.  As an outdoor, fun-having craft beer, this one is hard to beat.