My name is Cory, and I am a tinkerer.  I like Android because it allows me to have complete control over every aspect of my phone, I like homebrewing because I can make a beer and tweak it to perfection, and I like golf (even though I’m not very good) because once I can tinker and “find my swing” I feel on top of the world.  So when I heard of someone french-pressing beers, I was instantly intrigued.

Imagine this: I could take an easily accessible bourbon stout, and in 45 minutes I could have BCBS Proprietors! Ok, maybe it won’t be as good, but with just a couple of ingredients, some time, and a french press, you can create a myriad of beer possibilities.  Friend of the site, Drew, came up with a great idea to have a series of posts where we explore french-pressing different beers! This is the first installment of French Press Projects, and here are the concoctions we created!

I just got back from a trip to Vermont and was lucky enough to grab a case of Focal Banger while there.  I figured that there was no better beer to experiment with than the tropical, Mosaic Bomb that is Focal Banger. 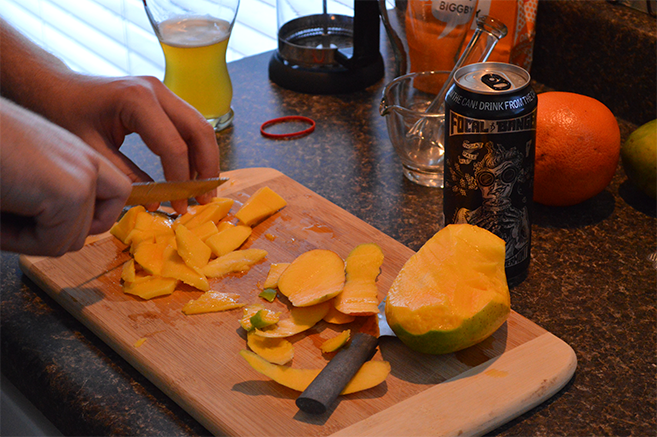 The first thing we did was to mash and muddle about a quarter of a mango, and then thinly sliced and crushed half of a habanero pepper and threw it into the mango mixture.  This was then put into the press and combined with a little less than half of a can of Focal Banger.  We let it sit for roughly an hour, pressed, and poured the “extract” into a glass which was then topped off with the remaining Focal Banger. 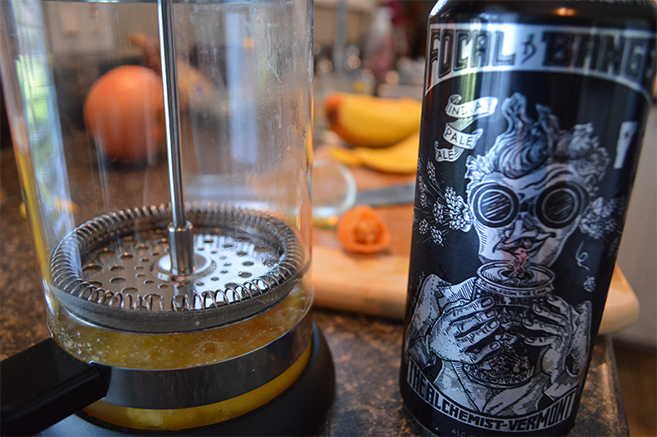 The Verdict – The aroma was obviously packed with huge tropical fruit notes.  It was just like the Focal Banger we know and love, pineapple, citrus, grapefruit, and mango — loads and loads of mango.  The pepper didn’t have a big presence in the aroma, but you could tell it was lingering somewhere in the background.  That pepper, though, was ver prominent in the flavor.  Just like the aroma indicated, this was a tropical and juicy IPA but the habanero half added the perfect amount of burn to give you a sensation without making you tear up.  The mango seemed to sweeten the beer and make the pepper less pungent, but it wasn’t nearly as prominent as the habanero.  This one was a huge success, Two Thumbs WAY Up from both Drew and myself.

This pairing was all Drew’s idea, and I loved it from the get-go.  Basil is one of my favorite herbs, and honey is a natural compliment.  Pairing that with Left Hand’s Polestar Pilsner seemed to only make sense.  Now, this wasn’t a “french press” as much as it was a “muddle” (we ran out of french presses), but we extracted enough flavor this way.  We took some basil leaves and about a tablespoon of honey and muddled them together.  Then we added half of the Polestar, gave it a good stir, and let it steep. 45 minutes later, we strained the mixture into a new glass and topped it off with the rest of the Polestar. 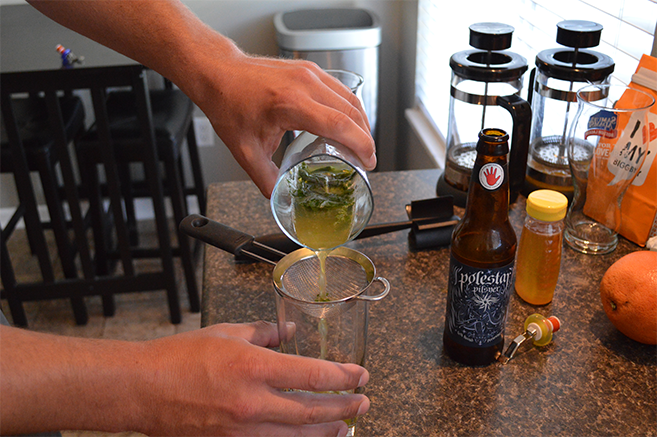 The Verdict – This is a beer I could smell all day.  The aroma was peppery and the basil was the star.  There was some honey-like sweetness, as well as the crackery malt from the pils, but basil was king in the aroma, and I loved it.  As for the taste, it was a bit of a split decision.  I found it a little tannic and harshly bitter and vegetal, while Drew thought it was really good.  The honey came through better on the taste, and I think there is potential here, but I preferred less basil, or maybe a shorter steep time.  Drew gives this one thumb up, while I gave it zero thumbs.

Do I need to say more?  We took an already amazing beer in Founders Breakfast Stout, and infused it with loads of toasted coconut.  This is the beer I was most excited about trying because I have always been a fan of coconut porters and stouts.  In the end, this one should taste like a liquid mounds bar. 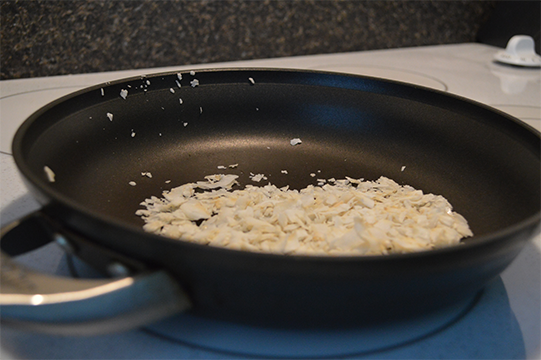 To create Coconut Breakfast Stout we took roughly half a cup (maybe a bit more) of flaked coconut and toasted it over medium heat until it was golden brown.  Then, we followed our french-press procedure: half of the beer mixed into the ingredients, let it sit for 45 minutes or so, strain, pour the rest of the beer, and enjoy.

The Verdict – Wow, just wow.  It’s hard to make Breakfast Stout a better beer without barrel aging it, but this definitely added something great to the mix.  The aroma had only hints of coconut, and the taste really wasn’t overpowering, but the aftertaste was where the coconut made itself known.  The beer was slightly creamier, and smoother than normal FBS, but the kicker of the coconut in the background was perfect.  This one gets Two Thumbs Up!

Ok, this was the beer we really just said, “Everything in the pot!” We started with Sierra Nevada’s Porter, and infused it with toasted coconut, toasted cinnamon, brown sugar, and cocoa powder.  This was our attempt at something like an Abraxas, or a BCBS Prop, or a Mexican Cake.  Not that it would live up to those, but the infusion should certainly elevate the Porter to Rock Star status. 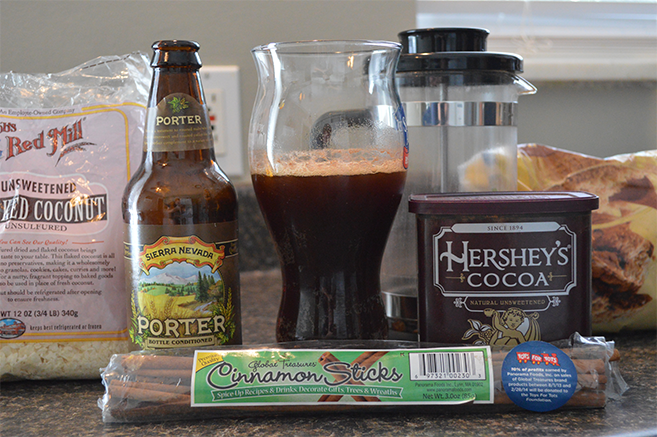 The Verdict – Well, there’s a lot going on here.  All of the flavors we added kind of muddied-up the aroma and the flavor. The Cocoa powder was the strongest of both the flavors and the smell.  The coconut was a second, then the brown sugar, and the cinnamon was basically lost on us.  It also had a slight cola aftertaste somehow as well.  I think we could have executed this one a bit better, maybe balanced the amounts better or steeped it for longer, but the overall product just didn’t live up to what it could have been.  I’d even say that the flavor here was less intense than the Breakfast Stout press.

None other than Mango Habanero Focal Banger.  This was just a perfect beer and one that I would make again and again.  In fact, I might go make one right now! 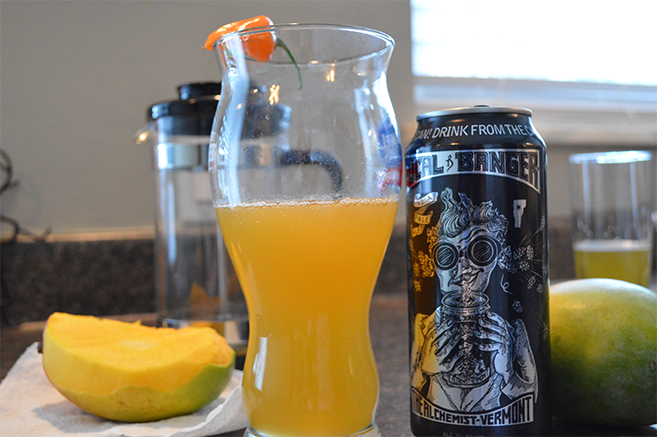