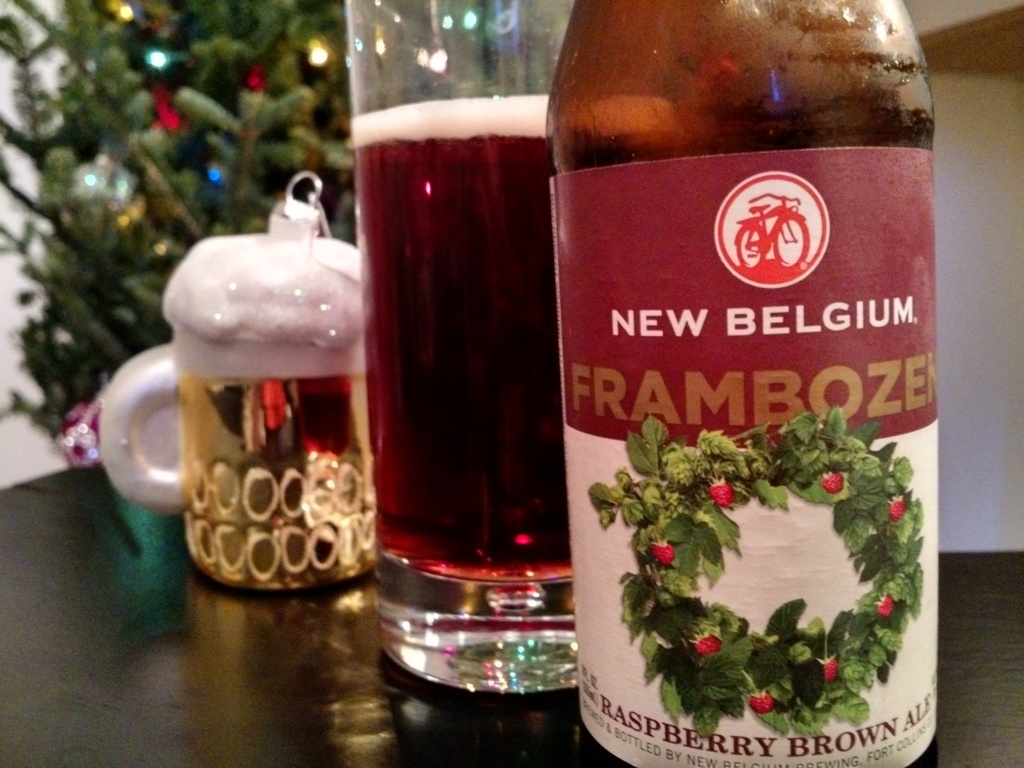 Welcome back to another cheerful edition of the 25 Days of Beers and Cheers!  It might not be fair of us to put two beers from the same brewery into this countdown (see our Accumulation review here), but when I saw Frambozen by New Belgium, I knew I had to give it a shot.  Raspberries paired with the roasted, chocolate flavors of a brown ale sounds like just the brew i need to get me into the holiday spirit.  As I decorate the tree with the fireplace going, the only thing missing is a great Christmas brew.  Hopefully, Frambozen delivers.  Here’s what New Belgium says about Frambozen.

Frambozen begins with the aroma of fresh red raspberries, followed by the ripe seductiveness of a fruity brown ale with depth and delicate malt notes. It is deep ruby in color, with flavors just as rich.

This beer is brewed as a brown ale, and has raspberry juice added twice throughout the fermentation process.  I can’t take it any more, let’s dive in to Frambozen!

I was shocked when I saw my first glimpse of Frambozen.  Maybe I shouldn’t have been knowing how it’s made, but it’s deep, ruby red tone doesn’t make me think beer as much as it makes me think wine.  It’s like a frothy cabernet.  It fits in perfectly with the Christmas season.  Wrap this in gold, and you’d have a classy Christmas scene in a glass.

I was worried that this would remind me a lot of Rubaeus from Founders, but, fortunately, this smells more like beer and less like raspberry Kool-Aid.  I get a lot of cocoa and bread crust mixed with a touch of raspberry.  If anything, it reminds me of raspberry jam smeared onto some dark toast.  I get some fusel notes, too, but it’s nothing overpowering.

Frambozen is slightly thinner than I thought it would be.  For a beer that makes me think of a chocolate raspberry tart, I would think that New Belgium would want to make this a little bit thicker, but the light body makes it very easy going down.  It finishes a lot drier than I expected, too, but that’s a twist I actually enjoy.

Just as the smell promised, this is the perfect blend of sweet and roasty.  It starts off like a light brown ale, and finishes with a fruity, raspberry tartness.  I’m surprised that the raspberry is in the foreground of the flavor, but it isn’t sweet like beers from New Glarus, or Rubaeus.  The balance is perfect for maximum drinkability.  This is definitely one of those beers that takes you for a journey, from chocolate to sweet, juicy raspberries, to a lingering bitterness, Frambozen has it all.

For so much promise and potential, I am not in love with Frambozen.  I was looking for this beer to be a dessert-like brown ale full of sweetness and richness for those cold winter nights.  Instead, I feel that this could be served in the summer time as a lighter raspberry brown.  I’m going to give Frambozen an 82.  I think a lot of people who want to try a different beer could pick up Frambozen and be pleased with it, but I just feel like it’s missing some “umph!”  I want it to be richer, to be sweeter, to be roastier — just turn the dial up one notch on all accounts.  Either way, it’s a good beer to cozy up with and share with a loved one.