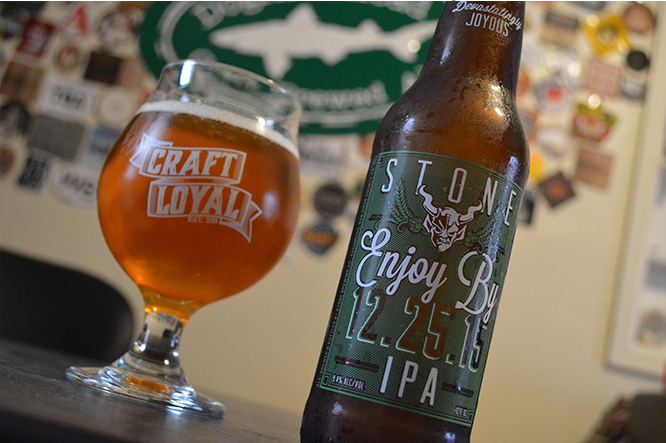 I’ll be the first to admit it, I have a love-hate relationship with Stone IPA’s.  They make such drinkable and classic brews with outrageous amounts of hops, but they usually use the hops that are a bit more catty, a bit more vegetal, and a bit more spicy than I like my IPAs.  With that in mind, I still love their Enjoy By series of beers.  Something about the idea of drinking this as fresh as possible (some call it a marketing ploy) pulls at the heartstrings of hop-heads everywhere.

We’ve had two varieties of Enjoy By on the show, you can find them here and here, and every time we’re just blown away by how in-your-face hoppy they are.  It’s the perfect balance of hop flavor to hop bitterness that makes this a classic brew.  This version’s Enjoy By date is 12.25.15.  Think of it this way, Stone is giving you a Christmas present you were meant to open early!

As most Enjoy By beers, 12.25.15 is reminiscent of wet straw in appearance.  It’s a golden yellow, with hints of orange and brown, and a snow-white head on top.  Based on the looks alone, it reminds me of Pliny, or any other hop-forward, dry beer that doesn’t want to showcase the malt at all.  It appears well-carbonated and the lacing is fantastic.

As I mentioned, I haven’t had an enjoy by in a few months, but this version doesn’t quite smell as pungent as I remember.  That being said, there are definite vegetal notes: fresh-cut grass, chives, things of that nature.  It also has some fruity notes like grapefruit, peach skin, and orange peel, but those take a back seat to the more dank qualities in the aroma.  This is one of those beers that I could smell and say, “This smells like something Stone would brew” because they love this earthy, spicy, and dank hop character in their IPA’s. 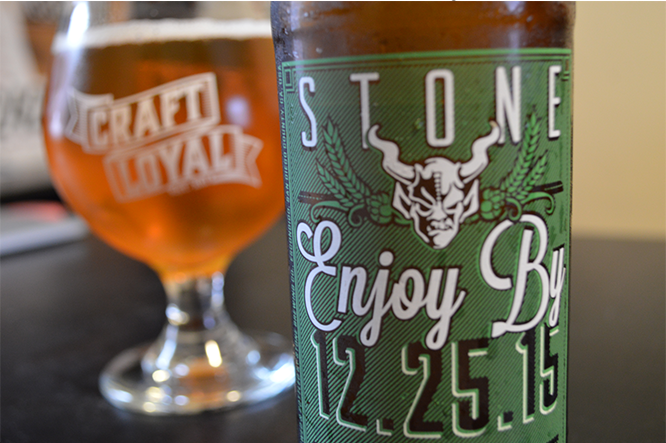 When you make a beer that is over 9% ABV, you are going to have a hard time with the heat of the beer being too high.  Somehow, Stone was able to keep the heat of Enjoy By very low, to the point that I don’t notice it’s 9% until I feel it in my stomach halfway through the glass.  Enjoy By has a medium to medium-full mouthfeel and just the right amount of carbonation.  It finished super dry and invites me to come in for more.  “The water’s fine, join me!”

This is one of those beers where the flavor is much more powerful than the aroma.  It’s an initial blast of chives (which I always get with beers brewed using Nelson hops), grapefruit, cattiness, and resin.  There’s this slight black pepper note and a little bit of biscuit from the malt that play really well with the fruitiness of the hops.  Speaking of fruitiness, I taste orange and even a little bit of gooseberry hidden in there.  I always find it interesting to try to guess what hops they use in this beer.  I’m assuming there is some Simcoe because of the cattiness, some Nelson due to the chive-factor, and even some Citra to give it that well-rounded fruitiness.  It has all of the characteristics you want in a West-Coast IPA, with the exception of tons of pine, but it is a hops showcase that finished dry and allows you to drink multiple, though at 9.4% that might be a short night for you.

This is just another classic installment of Enjoy By.  It might not have had a ton of aroma compared to my memory, but the flavor is spot on.  If you’re a fan of West Coast beers, New Zealand hops, or just Stone in general, you’re going to fall in love with this one.  I’m going to give it a 97.  Really, flavor-wise this was an IPA that I can’t fault.  Sure I don’t love this “style” of IPA, but the execution was impeccable.  If this was able to bring out some more hop character in the aroma, it might have pushed me to giving it a perfect score.  Either way, this is a beer you will enjoy (by) and you really need to get your hands on soon.