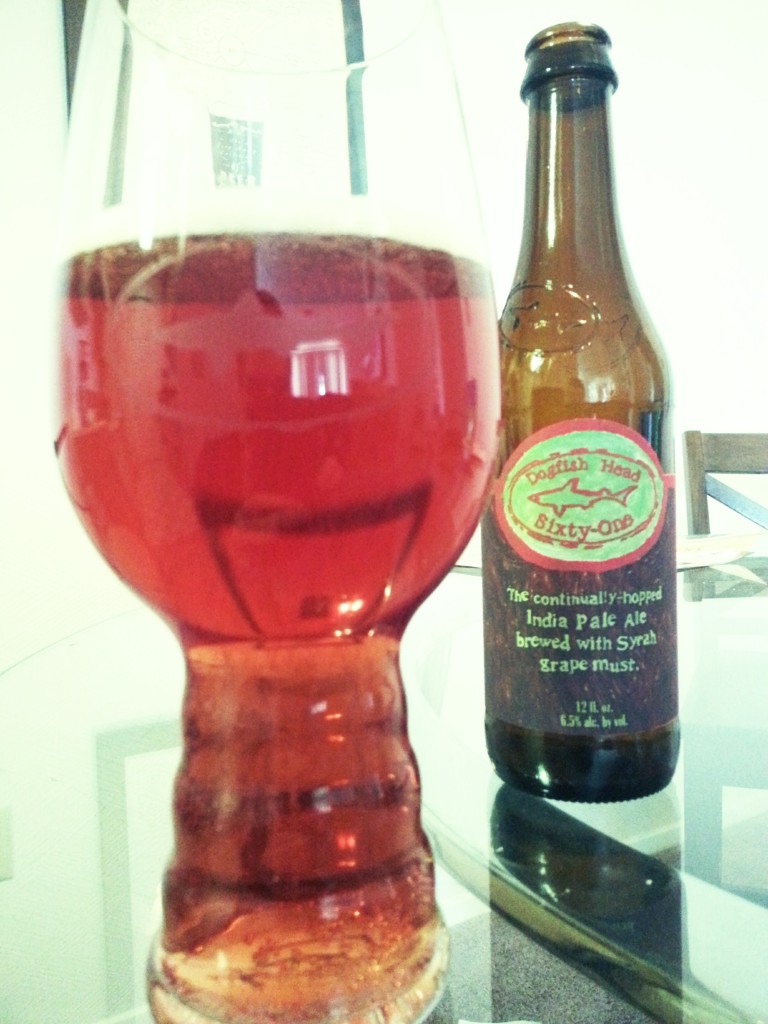 For the first time since 2007, Dogfish Head has added a new edition to their usual line-up.  I didn’t know much about Sixty-One when I first walked by it on the shelves of my local bottle shop, but after doing some research, I found there is a pretty cool story behind it’s creation.  To make a long story short, whenever Sam Calagione (founder and president of Dogfish Head) and his friends would get drinks they’d always get a round of their famous 60 Minute IPA.  This is a great beer on its own, but one day Sam decided to add a little bit of red wine in each of their glass, and the idea stuck.  They loved the flavors that blended together, and Sam knew he had to re-create it in beer form.

Sixty-One is named so because it’s literally just 60 Minute IPA plus one ingredient.  That ingredient is Syrah Grape must.  Must is the wine equivalent of wort in the beer world, so, in other words, it’s just grape juice.  I don’t know why they choose to use such off-putting words like “Must” and “Wort” when describing young alcoholic beverages, but they do.

Maybe I shouldn’t have been surprised by this, but I expected this to look more like their 60-minute IPA.  Instead, this liquid that looked like a strawberry champagne poured out.  Sixty-One is crystal clear, and has a color I can’t quite explain.  It’s red in certain lights, light brown in others, as if it’s a watered down mixture of grape juice, fruit punch, and beer.  The head on this beer is perfect, though.  It is tight, fluffy, and holds on for dear life.  The lacing is almost picturesque, as if a snowstorm frosted the inside of my glass.  The amount of carbonation is accented by the etching on the bottom of the glass, and it reminds me of water that’s on the brink of boiling.  This beer looks explosive!

A lot of fruit and citrus notes hit first.  The hops give it a grapefruit, and lemon-like aroma, while the grape must gives it a very distinctive wine-like aroma.  There is also a good deal of tartness here.  I know this isn’t a sour ale, but it kind of smells like one.  Tart, lemony, fruity — this beer smells light yet complex.

For the amount of carbonation that is visible in this beer, it is surprisingly flat.  Not completely, but just lower than expected.  What I did expect was how light this beer feels.  It has a medium to low body, which isn’t boosted at all by the amount of carbonation.  There is no alcohol burn to speak of, but Sixty-One does coat your mouth with a mixture of saccharine sweetness, and tingling effervescence.  Long after you swallow you can feel the beer lingering in your mouth.

Sixty-One is a more tart than anything else.  It’s a refreshing crispness that you won’t find in any other “IPA”.  I put IPA in quotes because I almost don’t want to classify this as an IPA.  Sure, it’s made just like 60 minute is, but the sweet fruitiness of the Syrah grape must overpowers any hoppy bitterness.  While the waves are short, this beer does have layers of flavor: first is tartness, followed by a long period of sweet grape flavor, and quickly finished with dry, herbal tones.  It’s a refreshing combination that would be great on a hot summer day.

I get it.  I see what they were going for with Sixty-One, but it just isn’t a beer I love.  I feel like I was duped into thinking I was going to get more of an IPA, like their India Brown Ale is, than a fruity beer.  That doesn’t mean this is a bad beer, I just felt mislead.

Going on taste alone, I have to give this an 82, B.  It’s light, crisp, refreshing, and very drinkable.  I actually ended up drinking the entire thing while writing this, and normally I only get through about half of a beer by that time.  I don’t know if I would search this beer out, but it has it’s place.  I bet it would pair great with a chicken salad sandwich (obviously one with grapes in it) at lunch time.  I am just always looking for the beer that makes me back away from the glass and say, “Wow, this is amazing,” but I’m not getting it here.  It’s a solid beer that wine lovers would like, and I think it’s worth a try if you see it on the shelves or on tap.