Dogfish Head to Build a New Distillery on Milton Campus

Dogfish Head, one of America’s seminal craft breweries, and home to some of the most ‘off-centered’ ales around is venturing further into small batch spirits by opening a brand new, state of the art craft distillery on their Milton campus.

Dogfish Head is not new to the art of distilling and crafting spirits (as opposed to craft beer). Back in 2002, owner Sam Calagione purchased a stainless steel feed-bin that with the help of engineers and welders became known as ‘Frankenstill’; a pot still, and the era of hand-crafting and hand-distilling gin, rum and vodka began.

For more than ten years, Dogfish’s Frankenstill was located on the second floor of the Rehoboth Beach brewpub, and put out an extremely limited selection of rum, vodka and gin. Most has been sold right out of the pub and at select retailers in Delaware. But now, after an expansion at Dogfish’s Milton brewery,they are prepared to vamp up and ramp up distilling.

According to Sam himself, “Dogfish Head’s distilling roots run deep, We’ve been putting our off-centered thumbprint on the distilling world for over a decade, and I’m excited that we’re now able to take this project to the next level by broadening production and distribution.”

With a twin 500-gallon copper pot still and a 26-foot column still from Louisville’s Vendome Copper & Brass Works, spirits like Brown Honey Rum (made with Delaware honey), Dogfish Head Jin (their “O.G.” hop-infused spirit) and some off-centered new recipes will finally begin to make it beyond Delaware’s borders. 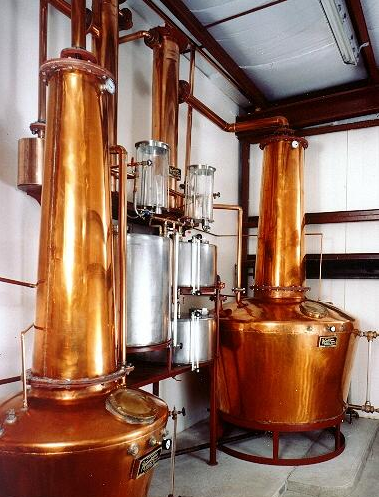 Dogfish rum, gin and vodka will begin rolling out in spring 2015 throughout Delaware, New York City and additional mid-Atlantic markets.

The new distillery will be led by Head Distiller Graham Hamblett. Graham, a horticulturalist with nearly two decades of experience running an artisanal winery and distillery, joined Dogfish in January.

According to Hamblett, “I am ecstatic to be part of the new chapter in the book of Dogfish Head’s spirits,” says Graham. “It is an honor and thrill to embrace the off-centeredness that Dogfish is so well-recognized for, and I’m eager to get this program up and running.”

You can read more breaking news about the Dogfish Distillery at their website: