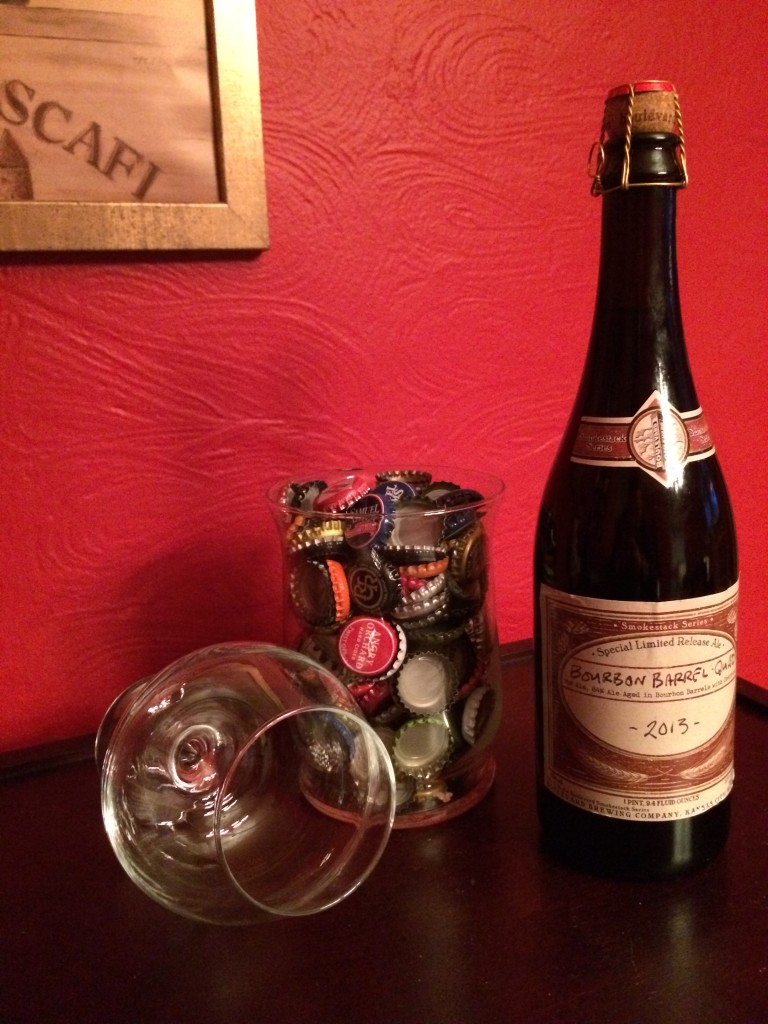 Happy New Year! We firstly want to thank you and everyone who has helped make our first few months of existence something very excited and special for us. We started this website as a simple blog to write down our feelings about beer, and while that is still exactly what it is, we have met some awesome people along the way who have contributed significantly. I thought that for such a special occasion, we should review an extremely special beer.

I scored this BeerAdvocate 97% rated beer in a beer trade (my first) with a friend I met on Reddit who happens to live in the Seattle area. We swapped some beers from the West Coast for some Michigan favorites and this was one of the gems he sent, so a huge thank you to my friend out West.

Normally, I myself do not care for Bourbon Barrel aged beers, as I am not a huge fan of the flavor profile, nor am I a big fan of Quad style beers. I wasn’t sure what I was going to think of this beer heading into it, but I wanted to keep an open mind, and I also tried very hard to ignore the fact that it is rated 97 by the leading review website (I didn’t want to force my brain into liking it). So, as I uncorked this bad-boy, I could not wait to sit down and review it!

Here is what Boulevard has to say about their Bourbon Barrel Aged Quad:

“Based loosely on the Smokestack Series’ The Sixth Glass, this abbey-style quadrupel is separated into a number of oak bourbon barrels where it ages for varying lengths of time, some for up to three years. Cherries are added to make up for the “angel’s share” of beer lost during barrel aging. Selected barrels are then blended for optimum flavor. The resulting beer retains only very subtle cherry characteristics, with toffee and vanilla notes coming to the fore.”

Just the description alone makes this beer sound amazing; so let’s take a look at what Cory and I thought of this beverage.

Bourbon Barrel Quad poured rusty orange with brown hues. The beer is topped with a very thick vanilla colored head. Brighter than I had anticipated but completely opaque. There was just a hint of sediment in the glass, but not enough to be in any way off-putting. The beer has a highly carbonated appearance with bubbles just flowing endlessly. 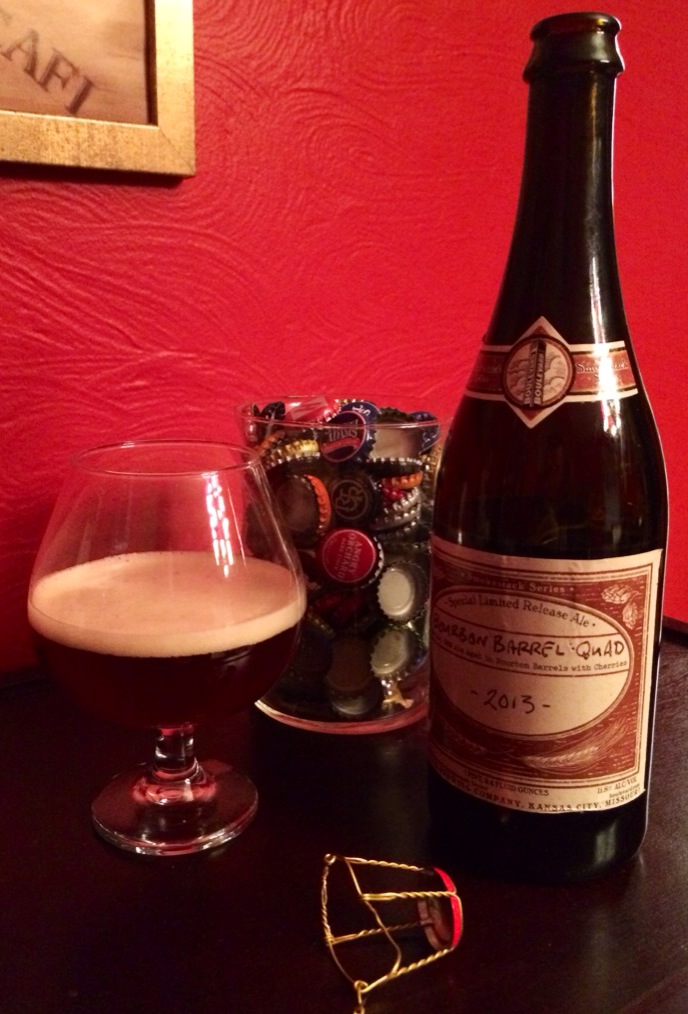 Bourbon Barrel Quad in the glass.

The aroma on this beer was very strong. We could smell the beer as we were pouring it from the bottle to the glass, which caught me a little off-guard, though the beer did not smell badly, it just was very pungent.

As far as what were actually were smelling, the cherry tartness advertised by Boulevard comes out right away. If you have read some of my other reviews on cherry infused beers, you’ll know this is a positive for me. Along with the cherry aromas, the high alcohol percentage gives the beer somewhat of a wine flavor. The best comparison that comes to mind is that the beer had an aroma profile like a fruit wine or a Riesling. The smell from the cherries added to that profile. Also on the nose comes light caramel hints and candy sugar, and of course, bourbon.

The reason this beer seemed a bit risky for me is as I said previously, I usually dislike the overpowering and overly strong bourbon aromas and flavors that come in your typical bourbon aged ale. For some reason, craft brewers seem to have this idea that more=better in every aspect of beer. MORE HOPS, MORE BOURBON, HIGHER ABV, etc. While that is to the delight of MANY beer drinkers around the world, sometimes I wish we could all just take it down a notch before our pallets and noses all disintegrate. What was nice about this particular beer is that, even though it has been aged for quite some time, the bourbon aromas were well balanced in the beer. It didn’t burn my nostrils or put any hair on my chest just from smelling it, which, trust me, is a good thing.

With hesitation (out of fear that the bourbon would incinerate my esophagus) I took my sip. To my surprise and relief, the primary flavors up front were very fruity and sweet. Make no mistake about it, Bourbon Barrel Quad is definitely warm as it goes down. There is a definite bourbon flavor. Thankfully, as previously stated, this beer is in good balance. Those flavors were ever-present, without being in-your-face and overpowering. I could definitely taste the vanilla flavors from the wood, which is a great component of that bourbon barrel aging that I do really love.

Bourbon Barrel Quad is a full bodied beer; very thick in terms of mouth-feel. There is a definite sweetness that is cloying but paradoxically, a little dry on the back-end.

As the beer warms, there is an almost plum or raisin taste; figgy or date flavors coat the mouth. Those dark fruit characteristics really come through. Simply stated; this beer is very complex, and changes flavor profiles throughout the experience.

Overall, I give Boulevard’s Bourbon Barrel Quad a 95, or a solid A. For being a beer that is completely out of my comfort zone, in terms of what I typically enjoy, this beer hit a home-run. The aroma is rock solid, the taste is completely balanced and totally complex, and it is an example of a masterfully balanced craft beer. I would absolutely recommend this beer to anyone, and I want to thank my friend out West again for sending me this. It just goes to show that with the hundreds and hundreds of craft beers out there, never drink the same thing twice (well, maybe not NEVER). Experiment! Get outside of that comfort zone and try beers that you may not expect to enjoy! You may just surprise yourself.

Thank you once again, everyone, and please have a very happy and healthy 2014.