Today on the 11th day of 25 Days of Beers and Cheers, we will take a look at a local Christmas brew for us here at the Brew Review Crew! Today’s Christmas beer is called ‘Blitzen’ from the Maumee Bay Brewing Company in Toledo, Ohio. You may know from previous posts, we have done extensive work with Maumee Bay Brewing Company. I wanted to make a note of this for our readers to ensure you that this post is completely independent of any work we have done with them, and thus will be completely impartial (as all of our work has been, but, you know, just to reiterate that fact)

Maumee Bay has this to say about Blitzen, “Once each year we craft this tasty ale to celebrate the festive holiday season. Beginning with a masterful blend of dark and hearty malts brewed with copious amounts of honey, we create a balanced sweetness that defines the spirit of this beer. Spiced with just the right amount of orange and cinnamon to round out this perfect glass of holiday cheer.”

Maumee Bay’s Blitzen has a ton of local competition in the Christmas Beer market. Perennial Christmas Beer powerhouses such as Great Lakes Christmas Ale and 12 Dogs of Christmas by Thirsty Dog typically dominate the pallets of Ohioans this time of year, but let’s see if Blitzen can step in the ring and stand toe-to-toe with the best of them.

Blitzen pours a dark reddish, coppery hue dominated by a brown overtone. This brew pours a little less clear than other similar Christmas ales. A nice, but thin off-white head tops the brew in my glass. 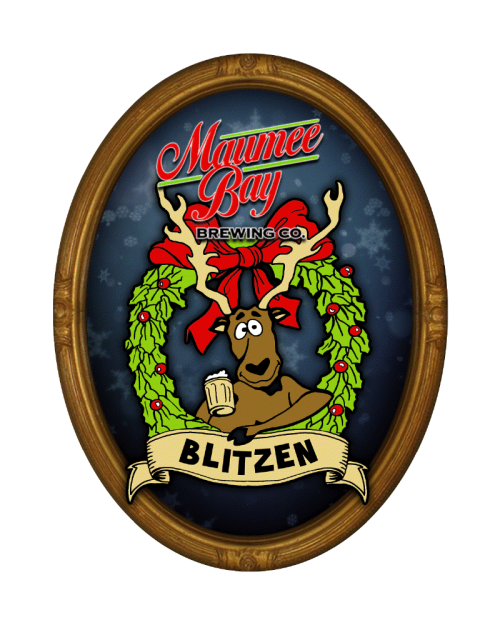 Holiday spices and candy sweetness come out swinging on Blitzen, though, it is not as pungent as other Christmas ales that you may have tried. If you have had a Christmas beer brewed with your typical holiday spices lately, you’ve smelled the aroma of Blitzen. Blitzen has a sweet malt undertone with a very light cinnamon aroma. While it smells nice, it is fairly typical, a could use just a tad more umph on the nose.

Ah yes, those familiar Christmas ale tasting notes! Blitzen is jam-packed with a rich, sweet malt backbone. Paired closely like two dancers locked in sync, Blitzen’s flavor is flooded with cinnamon & sweet dark cherry candy. Light flavors of ginger and a very slight orange peel show up later, though coming and going fairly inconsistently between sips. Just the absolute faintest presence of hops that come through earthy and dirty on the backend of the flavor. Everything about Blitzen comes through as nice, but just not memorable in any way. Blitzen, for everything is does right, just doesn’t take it far enough. I’m not asking for a spice-bomb for Christmas, but I do think Blitzen just needs a little bit more flavor to really make it a terrific beer.

Overall, I would give Blitzen an 81, or a B-. I am so happy to have a locally brewed Christmas ale right here in my hometown. There is always something special about drinking locally-brewed craft beer – and when you are in a restaurant and your locally-brewed beer is standing next to Christmas Beer giants, it is pretty neat to be able to choose your home-town favorite. As much as I want to LOVE Blitzen, it comes through as just a little weak and underwhelming. By no means is Blitzen a bad beer, it just needs to find a spine and come out swinging more than it does!

Join us tomorrow for our next entry into the 25 Days of Beers and Cheers!