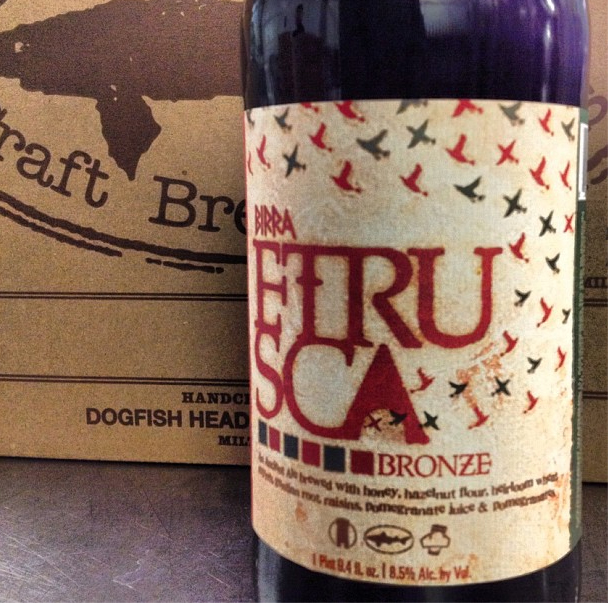 If you know Dogfish Head, you know they are trying to make unique, interesting, and just plain cool beers.  One of the lineups they pride themselves on is their Ancient Ales series where they make beers that are historically as accurate as possible.  They use history and molecular biology to recreate beer recipes found from all over the world.  The latest in the Ancient Ales series is Birra Etrusca Bronze.

Birra Etrusca Bronze was created after DFH founder Sam Calagione and molecular archeologist Dr. Pat McGovern took a trip to Rome.  They analyzed drinking vessels found in Etruscan tombs and reverse engineered a beer to be what they think is as close to what would have been in those vessels as possible.  They even took the time to retro-engineer the yeast with wine yeast from the area, and they even allowed the beer to ferment on bronze, just like it would have been done 2,800 years ago!

As for the malts and hops and other fun ingredients, here’s what Dogfish Head says goes into Birra Etrusca:

The backbone of Birra Etrusca comes from two-row malted barley and an heirloom Italian wheat. Specialty ingredients include hazelnut flour, pomegranates, Italian chestnut honey, Delaware wildflower honey and clover honey. A handful of whole-flower hops are added, but the bulk of the bitterness comes from gentian root and the sarsaparilla-like Ethiopian myrrh resin

I love Midas Touch, Theobroma, and many of the other Ancient Ales releases.  They are the exact type of beers that make Dogfish Head one of the best and most celebrated breweries in the country.  You can pick up Birra Etrusca on taps and in bottles anywhere Dogfish Head is sold.  I don’t know about you, but I know I’m going to get this as soon as I can.