Beer Camp: Everything That is Right and Wrong with Craft Beer 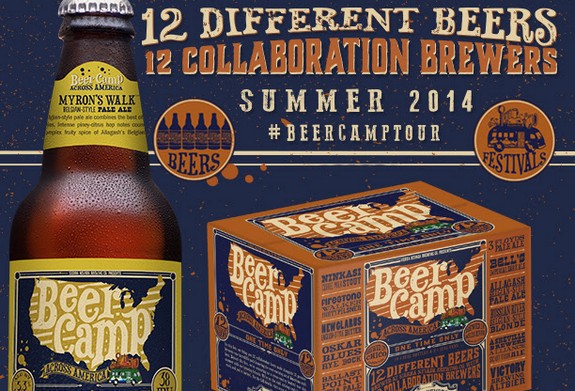 Sierra Nevada’s Beer Camp, arguably the hottest summer beer release, is finally in stores and on shelves across America. This 12-pack of beer, fairly priced around $25.00, is a box full of collaboration and sharing. Each beer inside of Beer Camp is a different collaboration between Sierra Nevada and the likes of Oscar Blues, Three Floyds, Bell’s, and more! The spirit of collaboration is one of the coolest things about Craft Beer. There is a sort of fraternal atmosphere amongst craft brewers and a definite sense of community. It is so awesome to see brewers collaborate to make an awesome collection of beers found within Beer Camp. Cases like this are great for all breweries involved (as long as the beer is good, of course!)

In addition to the unveiling of the 12 pack, Beer Camp is a collection of beer festivals celebrating the love of craft beer. You can find information about the tour schedule of festivals HERE. If you’ve never been to a beer festival, there are few other events in time and space where there can be hundreds of people in a small space, and nothing but friendliness, sharing, and happiness is exhibited…UNTIL IT’S NOT.

While Beer Camp is truly awesome in both philosophy and execution, it demonstrated the very dark and disappointing side to craft beer. For many, many beer lovers, Beer Camp was quite literally unattainable. Just in our Toledo market alone, Beer Camp was so extremely limited, the consumer’s odds of getting their hands on one was slim-to-none. Many craft beer and liquor stores that DID get some small quantity of Beer Camp withheld cases from the general public, instead saving them for their regulars and frequent-shoppers. Some may argue that reserving highly sought after releases for regular customers is a display of loyalty. While I agree with that sentiment to a certain extent, in one circumstance in the Toledo area, a customer drove out to a particular liquor store, was informed that they did indeed have Beer Camp, but it was not for sale at the time. The cases were reserved for regular customers. Instead of gaining a new customer, the gentlemen left the store empty-handed, and took to Facebook to complain and urge other shoppers to avoid the store. That situation is a lose-lose for everyone involved.

Another aspect of highly publicized and hunted “whales” is the strain in puts on local craft beer businesses. Just to get a small quantity of Beer Camp in their stores to sell, craft beer bottle shops and liquor stores had to commit to purchasing a large number of other Sierra Nevada products (multiple cases of Pale Ale in the situation we are aware of). This creates a huge problem for beer stores. If customers are coming simply to purchase the “whale” or the big release, and leave with nothing else, that store has not really profited from that sale. This could be a direct response to my argument against reserving items for regulars stated above. Chris Quinn, of the Craft Beer Temple in Chicago, discusses this issue in our interview with him.

Again, in this situation, everyone loses.

The endless search for rare craft beer is fun, but in my mind, really demonstrates a problem in the craft beer community. In a community that is supposed to be all about sharing, it is nearly impossible to ever taste any of the truly rare beers, unless of course you would like to trade your entire cellar to do so. It seems that it would be very difficult to attract new individuals to the craft beer community if they are almost certainly going to be excluded from every trying any of the truly special brews that are difficult to come by.

Does this problem have a solution? It can be reasonably assumed that it is not the intention of any brewer to create an environment of greed and envy among its drinkers, but demand is outgrowing supply by a large margin. It is fairly impossible for craft brewers to adequately supply the market with their specialty releases, and the result of this inability is the breeding of contempt of consumers, the culture of beer hoarding and greed, and unhappy consumers and retailers all around. Great breweries are getting caught in this web as well as can be seen in the video of the Hunahpu Release Party at Cigar City.

This issue came is especially relevant with the release of Beer Camp. The moment Beer Camp was announced and started to hit store shelves, craft beer lovers attempted to get their hands on them in whatever quantity they could (us included). Long story short, by 11am on a Tuesday morning, it was effectively sold out in the greater Toledo area (I’m not even sure how that’s possible! Tuesday is a work day!)

I was read stories online of well-connected beer consumers, who are quite well connected with people in their local craft beer industries being able to secure NUMEROUS cases of Beer Camp and that rumor is that those cases will be used as trade bait for some other rare releases. I have no problem with a person exercising their RIGHT to buy as many Beer Camps as they want, but is it morally right to purchase a high quantity of a limited release? That means that MULTIPLE other people are being denied the opportunity to try Beer Camp. Perhaps I am being sensitive, but it just seems….wrong.

Perhaps consumers should stop taking craft beer so seriously. For every one Beer Camp case you miss out on, there are literally HUNDREDS if not THOUSANDS of excellent beers lining the shelves, begging to be taken home and enjoyed. I suppose it all depends where you stand on high-end/rare releases.

I should be clear that I do not hold anything against Sierra Nevada or Beer Camp, and I am very lucky that we were able to get a case of the collaboration series (though not at as anybody’s regular customer, just by pure luck)

What are your thoughts? Should craft beer stores reserve limited releases and rare beers to their regulars? Should it be first come first serve? Should customers have to purchase more than just the rare beer? Let us know what you think in the comments below.