One way to get someone to buy a beer is to throw out buzzwords.  Barrel Aged or Imperial or Specialty Ale are things you’ll see on a lot of beers, and for the most part, those are the ones you want to try the most.  Community Beer Company out of Dallas, Texas, has a Belgian-Style Dark Specialty Ale called Inspiration.  Throw that into some barrels, and you’ll have a beer worth trading for.  This is Barrel Aged Inspiration from Community Beer Company.

What a beautiful beer! Inspiration is borderline brilliantly clear; it’s a deep dark chestnut color with amber red hues.  I call this color “cherry coke”.  If you’ve ever made a homemade cherry coke then you know what I’m talking about.  The head is thin, typical in barrel aged beers, and is an off-white to khaki color.  Really pretty beer, can’t get much better than this!

Holy smokes! Digging my nose into this Mast Glass is an incredible experience.  Inspiration smells like a cherry cordial.  Lots of dark fruits and cherries, and chocolate, then you start to get the barrel character: vanilla, woodiness, and leather.  I’ve had a decent amount of barrel aged beers on this site, but this one is right up there with the best.  It’s smooth but complex, delicate yet powerful, just an A+ experience.

The mouthfeel of Inspiration is just what I wanted in a barrel aged Belgian.  It’s medium to full bodied, but is not quite so chewy and sticky that it would be too saccharine.  Even at 10.2%, I don’t get a strong alcohol presence from this one, which is pretty darn impressive. 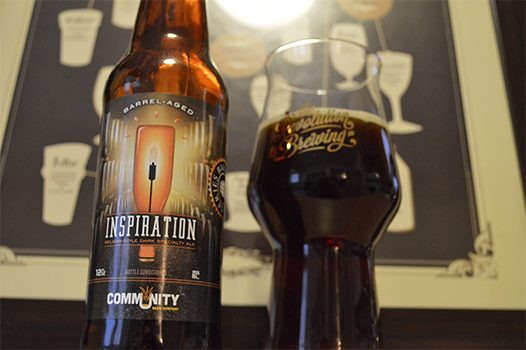 While this is a good beer, the aroma is much more enticing than the flavor, for me.  I get some cola-like flavors, lots of dark cherries, and just a hint of vanilla from the barrel.  There’s this weird lingering smokiness that I want to attribute to the barrel, but I can’t be sure on that.  For a Belgian-style Dark Specialty Ale, I’m not getting a ton of the typical Belgian beer flavors. It’s not yeasty and funky and complex, it’s actually kid of boring. In a way, this is more like a Jack and Coke than a Belgian ale, to me.  Very strange, I’m not sure I’ve ever had a beer that tastes quite like Inspiration.

I really wanted to love this beer. The aroma on Inspiration had me thinking this was going to be close to a 100 beer, but the flavor just lacked too much.  Great complex beers often have multiple layers of flavor that you can sift through and pick out.  This was too “one-note” for me.  If I was looking for layers of complexity, I was given a blended smoothie of dullness.  That being said, it isn’t a bad flavor at all, just kind of a boring one.  For that reason, I’m going to go 82.  It’s a decent beer, but left me wanting just a bit more.

Let me know if you’ve had Community’s Inspiration.  Did you love it? Did you hate it? Leave comments below!