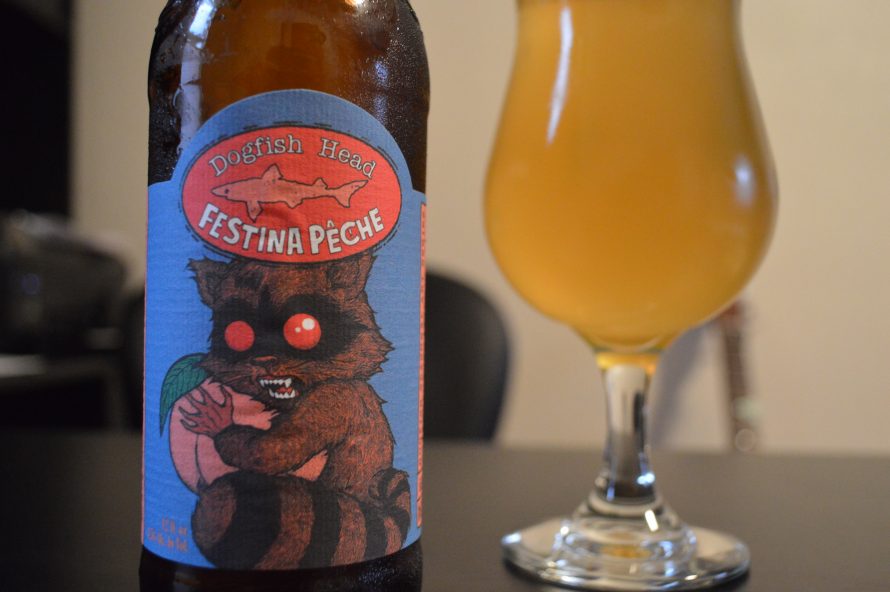 I may be a couple, you know, centuries late to the party, but I’ve found myself smitten with Berliner Weisses recently.  They’re the perfect combination of sour ale and light, summery wheat beer.  Traditionally, they are so tart that they are served over shots of either raspberry syrup, or woodruff syrup to give it a more balanced sweetness.  Taking that tradition and mingling it with their own off-centered brand, Dogfish Head has created Festina Peche, a Peach infused Berliner Weisse Style beer.  Here’s what brewer Sam Calagione has to say about their neo-Berliner Weiss, Festina Peche.

As he mentioned, it’s tart, but not too tart, well, at least I hope so.  Let me get this into a glass and dive in!

If anything, this looks like a hazy champagne.  Festina Peche poured just like “the bubbly” as it had a big fireworks show of CO2 as it poured, but then just fell flat to the point that there is literally no head left.  That doesn’t stop it from looking like it will be more on the fizzy side of things, though, because bubbles are shooting their way to the top of the glass.  Festina is a light straw color, reminiscent of a clearer farmhouse ale than a Belgian wit.  It almost looks like they took a saison and watered it down.  It’s both intriguing and off-putting at the same time.

Wow, well this aroma made up for any questions I had in the appearance department!  It’s a nose-full of canned peaches and soda water.  it smells light but sweet, not much tartness at all.  Other fruit flavors like green apple and unripened apricots come out as well.  This thing smells very, very inviting!

As I thought, this is a medium to thin bodied, but highly effervescent beer.  The carbonation is almost scratching my tastebuds, as opposed to tickling them.  It also coats the back of my mouth with a residual sweetness that makes me either want another sip, or a water on the side.

Dogfish Head, stop throwing me for loops!  Somehow, they managed to get a great amount of sourness and tartness into, what I expected to be, a peach explosion.  Honestly the balance is perfect.  The first flavor is juicy peach sweetness, but seconds after the swallow you are left with a bone-drying tartness.  It’s almost like eating a peach Sour Patch Kid in reverse, it starts sweet, then ends sour.  But, as I said, it’s in perfect balance so that, even though it is very sweet, it is insanely drinkable.  The only downside is that the beer doesn’t quite finish “clean” to me.  There is a slight, cardboard-like aftertaste that settles in long after the beer has been swallowed. 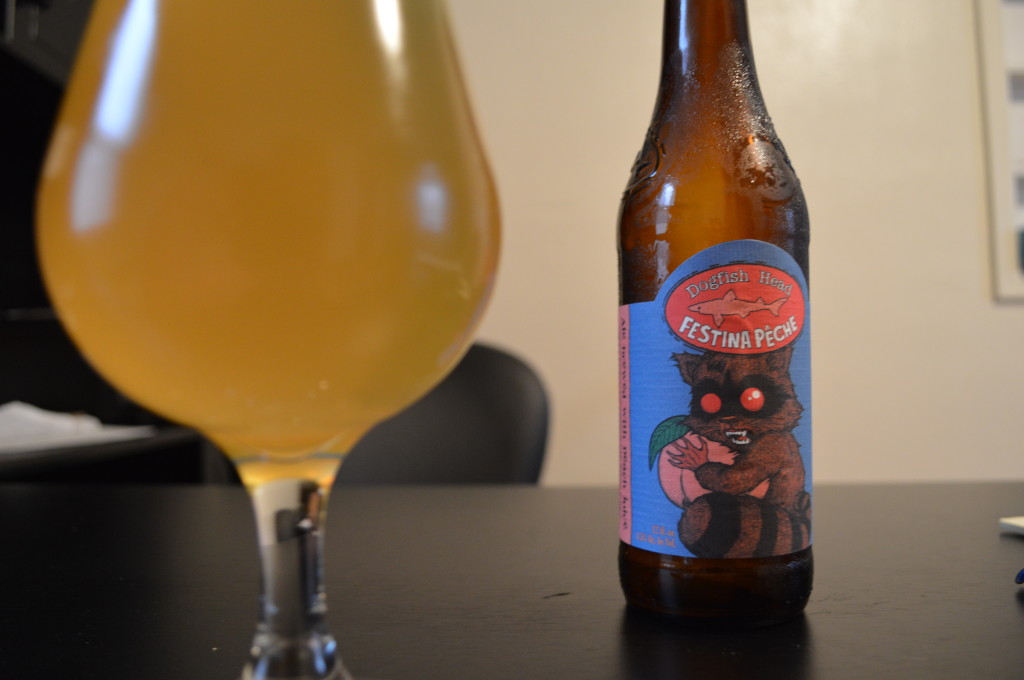 While I haven’t had as many Berliner Weisses as I’d like, I have to say, this is a winner.  I love the compliment of sweet and tart, the playful take on how a Berliner Weisse is traditionally served, and the high drinkability of this beer.  I actually feel like my thirst could be quenched from drinking this beer.  That being said, I’m giving it a 96!  I don’t know if this will be everybody’s “cup of tea”, but it certainly is mine.  The only thing keeping it from achieving a higher score is the aftertaste and residual sweetness in the mouth feel.  I could do without both of those, but the “fun factor” of this beer is spot on, and I would love to sit down with many, many more.