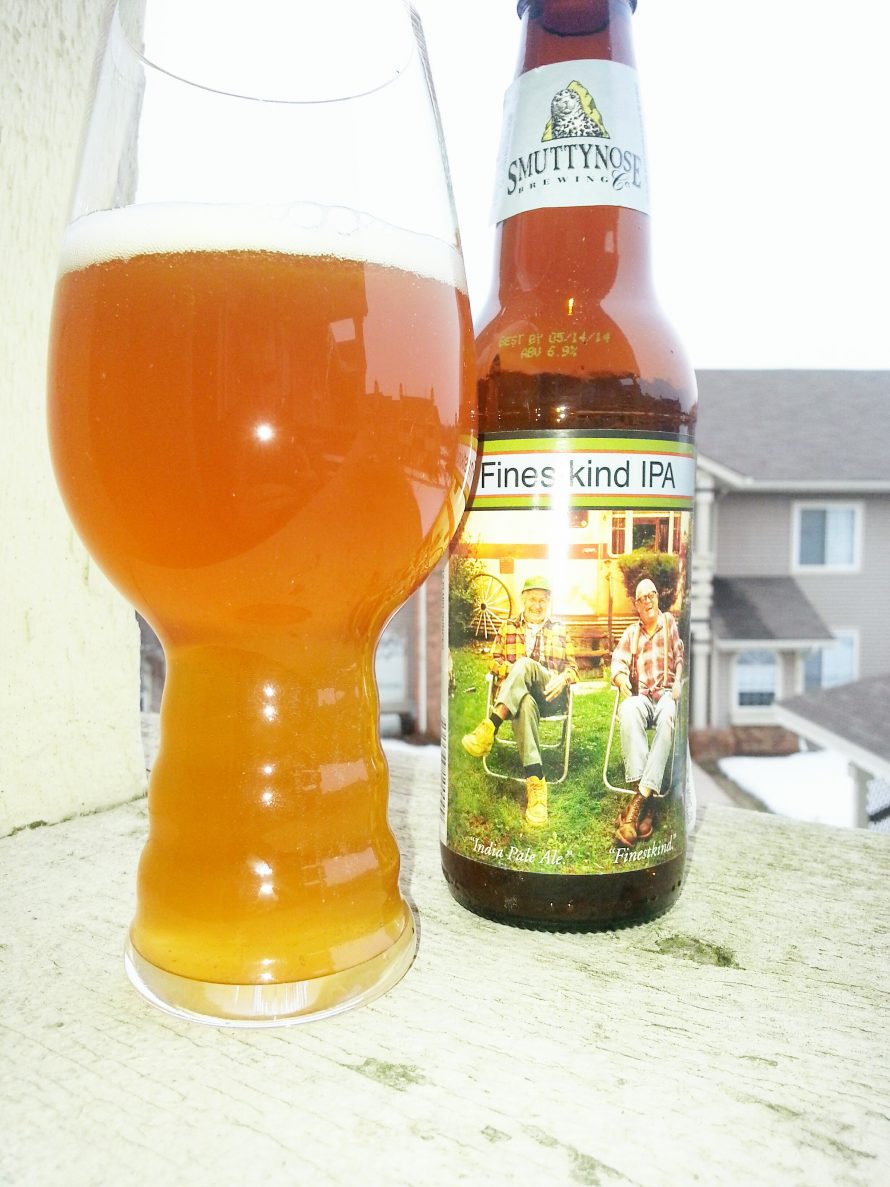 I’ll be completely candid with you, there is something about Smuttynose’s marketing that just misses the mark for me.  I feel that it looks like an upscale home-brewery that hasn’t upgraded it’s packaging.  But, by all accounts I’ve read, they are one of the better breweries New England has to offer.  Since I’m trying to get over my “judge a beer by it’s label” ways, I’ve decided to oust my prejudice and check out their Finestkind IPA.

Finestkind IPA is described as, “An IPA for hop lovers looking to satisfy their craving in a way that is not easy to find.”  It was crafted as a response to the growing popularity of hops, and the IPA in America.  Smuttynose has always had their Shoals Pale Ale, and back in the day, that was considered too hoppy for the commoner.  They have since been begged to make a highly hopped beer, and Finestkind was their response.  I think of myself as a hop-head, and can almost always jump on the thought of”the more hops, the better”.  So, with that being said, I’m thirsty.

Finestkind is a wonderfully hazy brew.  Depending on the ambient lighting, it can either look like a rusty yellow, brilliant orange, or a light copper, but poured with a tight, beautiful, slightly-off-white head.  The lacing on this beer is top notch, letting me know just how big of a sip I took with each pull.  I can see that Finestkind is a well carbonated IPA, as the CO2 rushes to replenish the fading foam.  It is an aesthetically pleasing IPA, leading me to crave my first sip.

Unlike some of the more West-Coast style IPA’s, Finestkind has a highlyherbal aroma.  It’s slightly grassy, while also having a good malty-caramel punch as well.  It smells a lot like my favorite pale ale homebrew recipe which calls for Amarillo and Nugget hops, but is backed up by large doses of bready crystal malts.  I’m getting notes of tart fruit like sour apples, and, as the beer sits a bit and warms up, more grapefruit character comes out.  There is a little bit of lemon peel on the nose, but grass, herbs, and bread overpower the citrus for me.

Where did all the carbonation go? (Please, do yourself a favor, and try to read that line again without singing it to the tune of “Where Have all the Cowboys Gone”)  The head on this beer is so creamy, the bubbles are visible, but yet it is seemingly a very low carbonated beer.  The CO2 that is present does have one thing going for it though, they are tiny.  I’ve said it before, the best IPA’s have smaller bubbles that don’t add a huge bitterness like larger bubbles do.  This is true for Finestkind.  While the beer has a full-bodied mouthfeel and is slightly creamy, the carbonation doesn’t distract from the hops at hand.   It is a very smooth beer.  at 7% ABV, there is not a hint of alcohol, which makes this for a dangerous beer.

Sharp, bitter, and astringent.  The flavor of Finestkind doesn’t come at you in waves, but is more like a guitar amp turned to “11”.  All of the flavors start and end in the back of the tongue.  This beer is earthy, yet full of grapefruit notes, and orange pith.  It’s get some lemon-rind tartness, but what really overpowers is just a cloying bitterness.  It’s almost like someone zested an orange and then told me to take a bite while all of the white pith was still in tact.  To be honest, for me, it’s bitter overload.

Finestkind is also heavy on the herbal and earthy tones of grassy hops.  The same way that I find gin to be too much like pine, this beer is almost too resinous for me to like.  The malt does its best to be big and bready, but I can’t help but feel that I’m just chewing bittering (high alpha-acid) hops.

I’m very torn with Finestkind.  It has some of the best qualities a beer can have: Great mouthfeel, incredible drinkability, lingering head and lacing, and heavenly aromatics.   Where it falls short for me is in the balance.  I don’t want my beer to finish with me feeling that I need to take a Brillo pad to the back of my tongue so I can eat my dinner.  I love the hops they used, but just think that played in less of a harmony, and more as a one-note band (by the way, that note is B#).

I’m giving Finestkind an 89, or a high B.  I have been reading up on Finestkind to see what other people think, and my vote is lower than the norm, but I just am not loving it the same way I love say a Hopslam, a Rye of the Tiger, or even a Red’s Rye PA.  It’s still a very worthwhile beer, and one that you should pick up if you see it.  Pair it with a full-flavored dinner though, or you will have trouble getting any flavor through the bitter aftertaste.

Do we Need the Independent Craft Beer Seal?

Chicken Beer? When Does Craft Beer get Too Weird?

Haze Craze or Flavor of the Week?

Is TWO HEARTED Really the BEST Beer in the US?